I save my films up before developing, normally for about 6 months. This means I can buy 5 litres of developer (which works out cheaper) and dev all the films whilst the chemicals are still fresh.

This year however I shot far more film than I have before, so much in fact, that in some cases I completely forgot what I had been shooting. This is one of those forgotten films, which came as a pleasant surprise.

I had been to historic Greenwich in South East London in the summer, and I remembered shooting a roll of film, which I have already posted, but I totally forgot about this second roll.

The camera was my trusty Yashica 635 TLR and the film was Ilford HP5 shot at 800. This time I developed the film in Xtol, the first time I have used this developer (I will do a post with my thoughts on Xtol later). 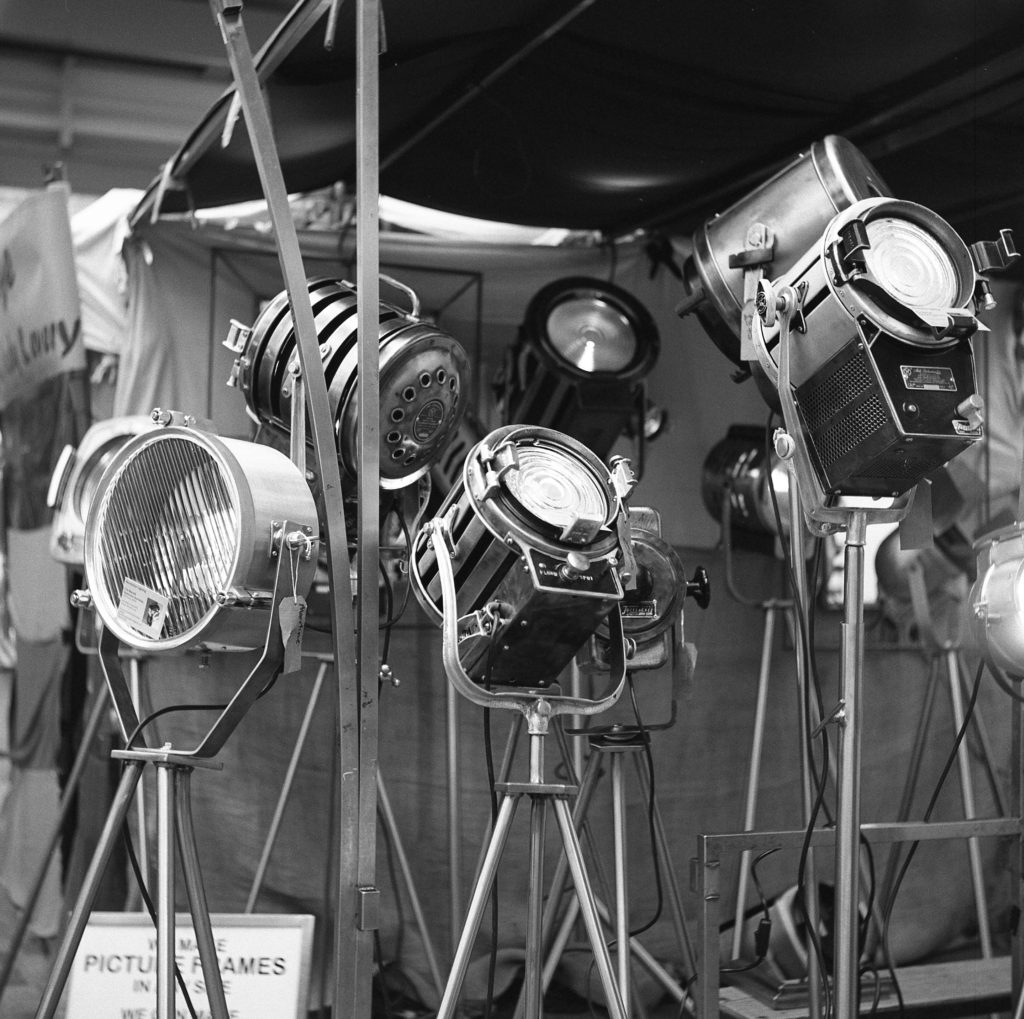 The above photo really grabbed my attention. I love the level of contrast and the smoothness of the photo. I think it looks more like FP4 than HP5.

The contrast is probably helped by shooting at 800, but it is difficult to say if it is also down to the developer without looking closely at the other rolls souped in Xtol. The lack of grain is fantastic for a 400 speed film. Xtol certainly seems to live up to it’s reputation as a fine grain developer. The sharpness and clarity of the photo is impressive, testament to the quality of the Yashica TLR’s. None of these photos has had any editing, they are a straight scan on my Epson V550.

On a personal note, I also loved the subject matter. I often struggle to put what I see in a photo. Something looks fantastic to the eye, but when I take a photo I don’t manage to capture what I was seeing. On this occassion the photo turned out exactly how I wanted, if only more of my shots did that! 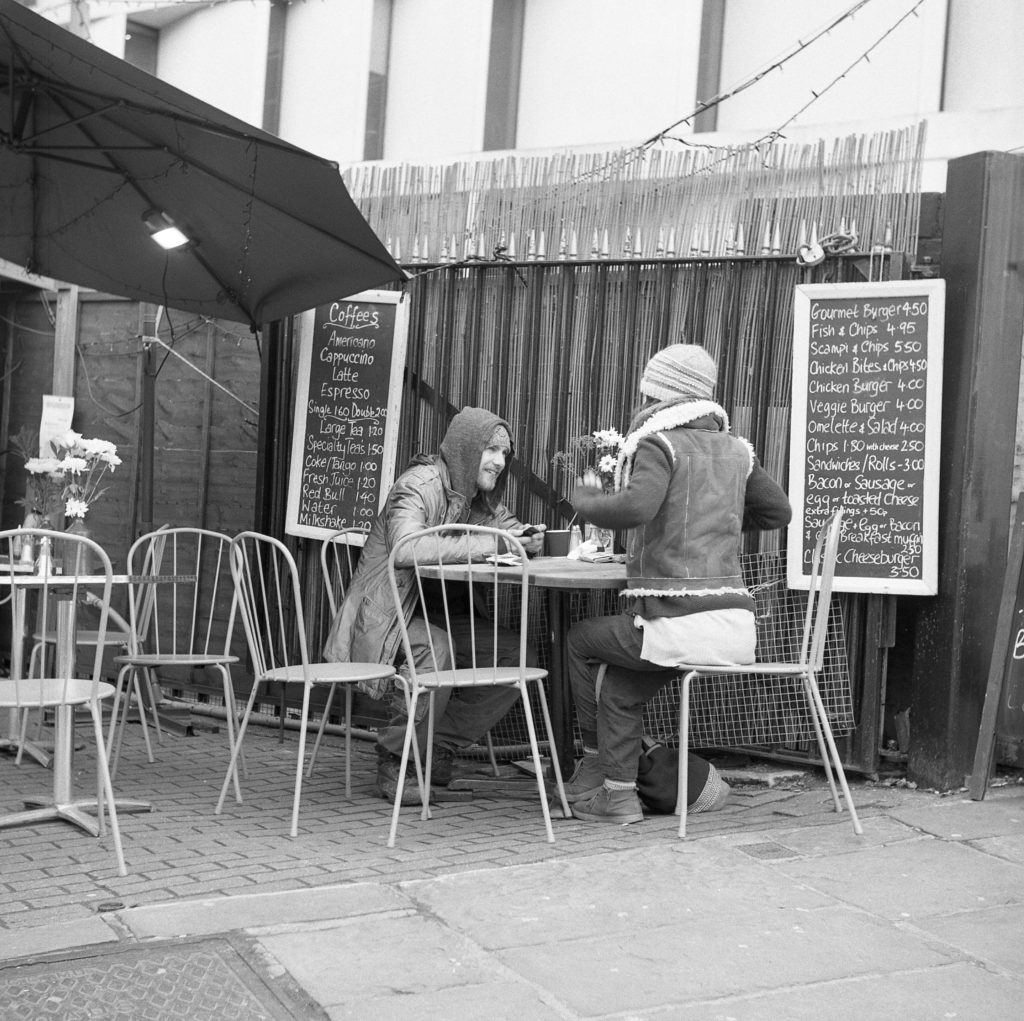 I love to try a bit of street photography with my TLR’s. I love TLR’s, but I will be the first to admit they can be challenging for grabbing quick shots. However sometimes they excel, and this is one of those times. A TLR tends to make you stand out like a sore thumb, but if you can blend into a crowd for a while, so no-one pays you any attention, they are great for taking sureptitious shots like the one above. This shot is less contrasty than the previous, more how I would expect HP5 to look, however it has the same smoothness and lack of grain, probably due again to the Xtol. 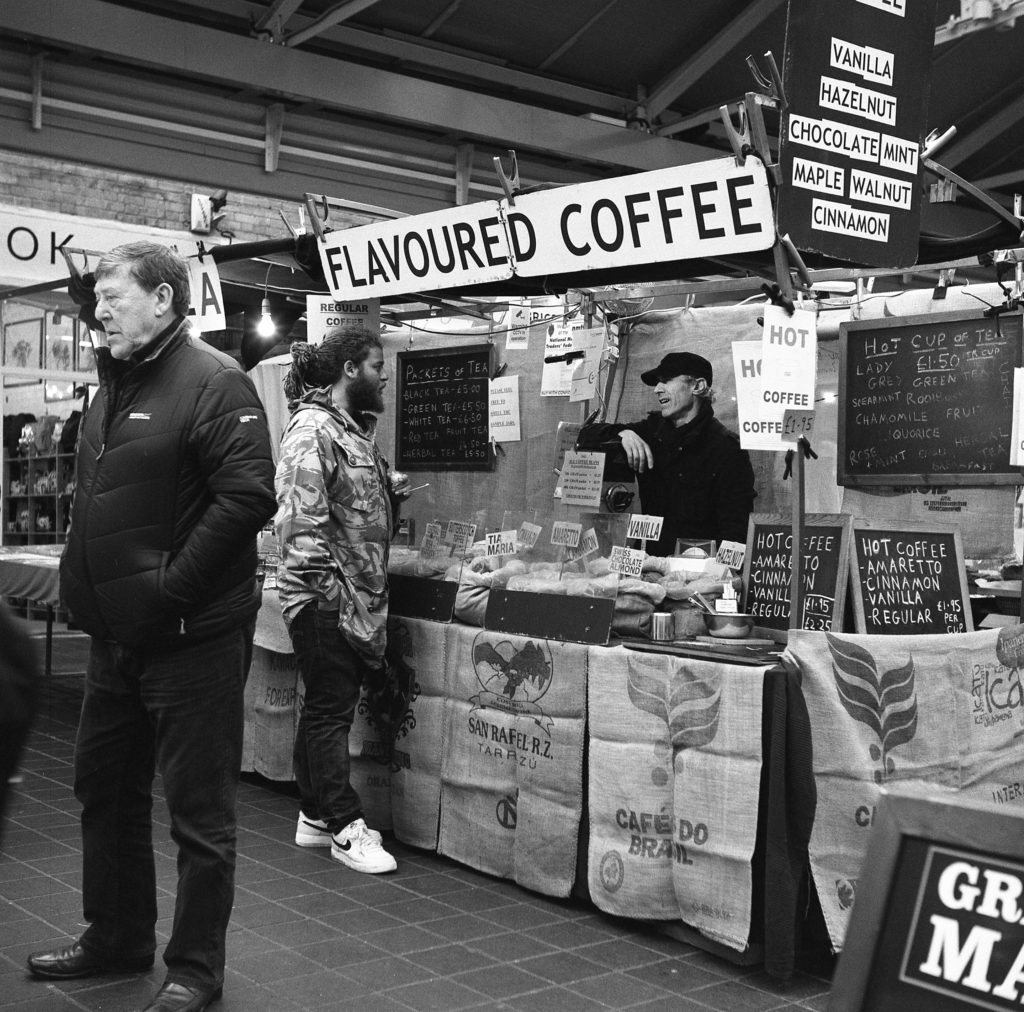 This last photo also stood out for me, once again because of the smoothness of the contrast and the grain. The contrast is there, but it has good mid range tonality as well, the contrast not looking in anyway harsh. There is excellent shadow detail and no blown highlights.

The lens has captured fine detail, down to the texture of the coffee sacks and the writing on the signs. There is even a nice bit of vignetting around then light bulb. This is why I love medium format, you just don’t get that detail on 35mm.

This has been my first post for some time, real life has been getting in the way of photography. I still have about 16 rolls of 120 to develop.

Looking forward, I have my review of Xtol to publish, as well as many new photos to post. Now the autumn light is here, I will continue my project to shoot Ilford Delta 3200 at 1250 to try and produce a creamy grain. I have also purchased a bottle of Microphen developer specifically to use with the Delta 3200 to try and achieve this. When I have shot the last 6 rolls I will dev the lot and post the results.

I have purchased another new developer, Bellini Hydrofen. This is supposed to be like Rodinal Speziale (a fine grain version of Rodinal). If it is good (and initial reports suggest it is) it may become my go to developer. The conveniance of Rodinal without the grain. That will be the subject of a forthcoming review.

I have also been shooting some Ilford Pan-F in 120 and will be developing a few rolls using Rodinal. A fine grain film and a high grain developer sound like a contradiction, however I have heard they go great together. Once again, I will post the results in the blog.