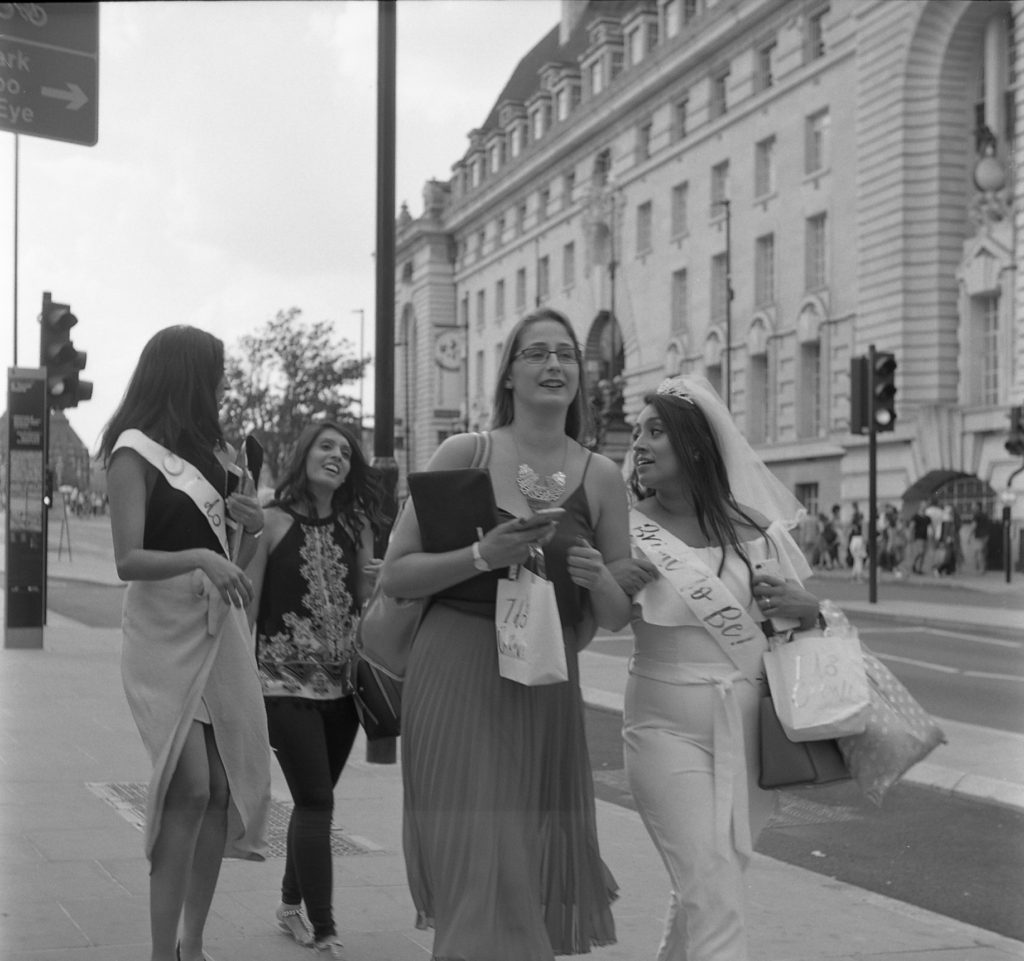 I am still experimenting with my 127 format photography. I have two Yashica 44 TLR’s, a 44a with the knob wind and a more recent purchase, the 44 with crank wind. I know people say the crank wind is more conveniant, however I do not shoot huge quantities of film through my TLRs so the knob wind is not an issue. The knob wind cameras also have less to go wrong with them. The main advantage of the 44 is it has a Bay 1 mount for a lens hood, whereas the more basic 44a does not.

I was wandering along the embankment of the River Thames in London towards Westminster Bridge. It was a sunny day, so I loaded the 44 with Rerapan 100.

The crank wind on my 44 works okay, however the frame counter is problematic, it does not reset easily and on this occassion forgot to reset it before shooting. This caused some spacing issues, as the crank wind was not rotating enough to wind the film on for correct spacing (it winds further at the start of the film and less towards the end to compensate for the take up roll getting bigger as the film is wound on to it).

TLR’s are always a challenge for moving subjects as they are slower to set up for a shot. With the photo of the hen party I saw them coming and quickly focused on a section of pavement they were about to walk through, then swung the camera up for the shot just as they walked over that piece of pavement. I like the shot, the 4 girls are having a good time but do not look too gawdy. 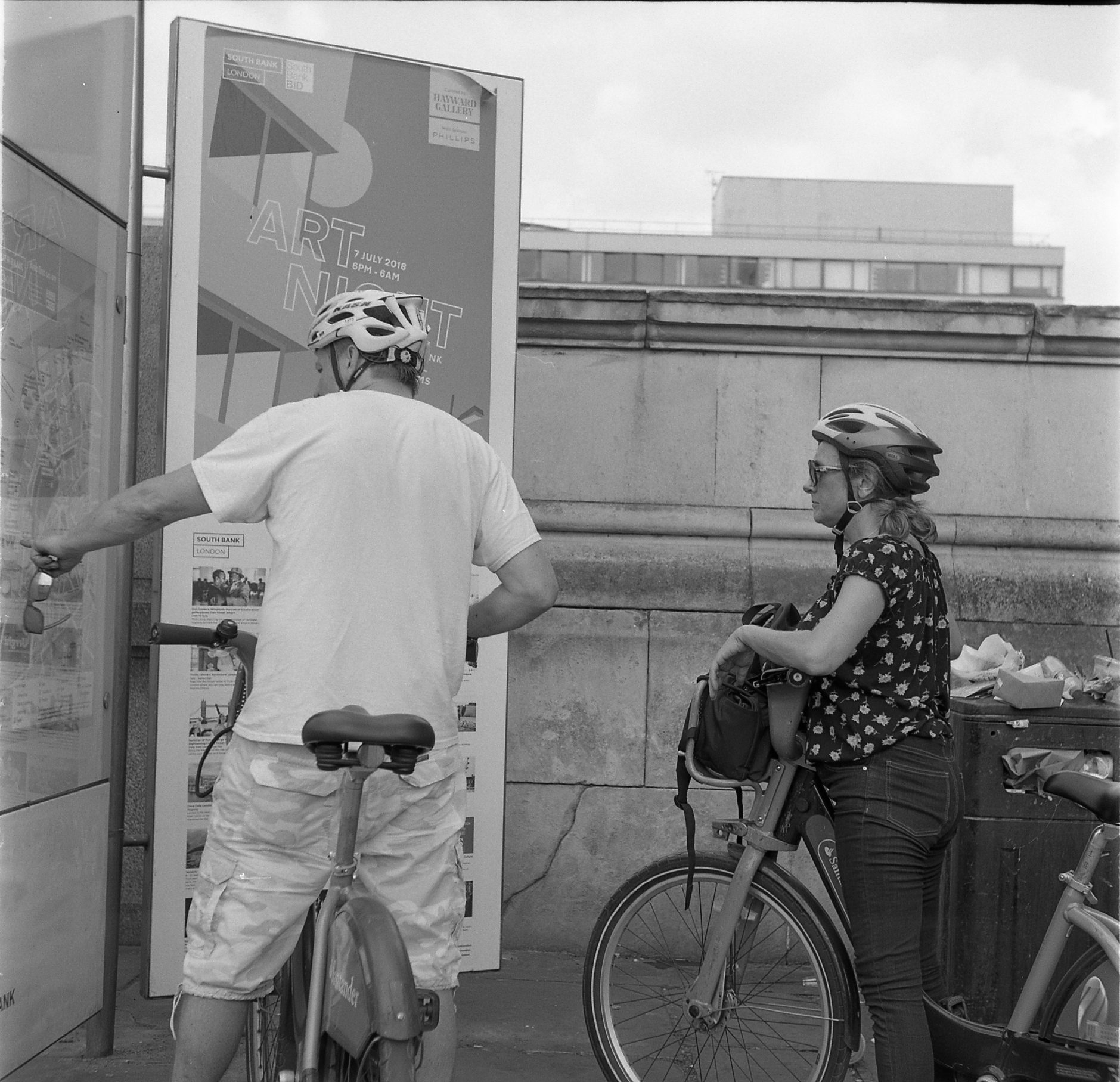 I love shooting the TLRs, but they are a big cameras to carry around, which is why I like the Yashica 44. It is much smaller and lighter, but still packs a decent lens for sharp photos. The only thing that is different is the small focussing screen. I sometimes struggle to shoot the camera from the waist as the image on the ground glass can be tricky to see. I would shoot the smaller Yashicas more, but at £13 a roll of film, it works out at over £1 per photo. Rerapan have now introduced an ISO 400 film, which means I can now shoot my 44’s in the winter months. I have invested in several rolls of the 400 Rerapan, as well as some rolls of Ilford Pan 400 re-rolled into 127 format, and will be shooting those over the coming months.

This film was developed in Xtol. This is the first batch of Xtol I have mixed up, and I am very impressed with the results. Xtol gives the films a very clean look, with minimal grain and a nice level of contrast. It will be a developer I use again. 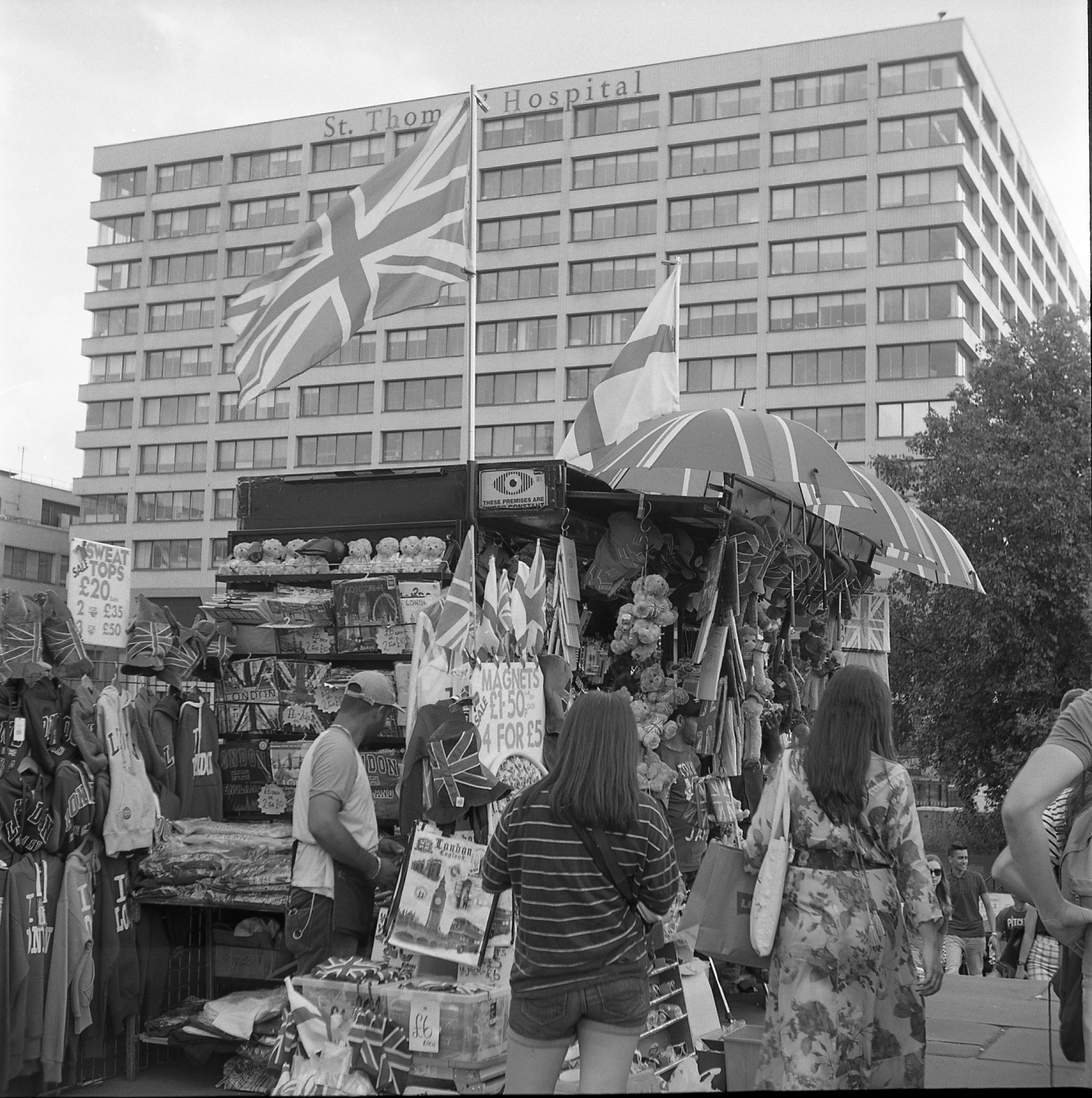 I cannot decide if I like this last photo. The stall was very brightly coloured, the vivid reds and blues of the union jack patterns on the merchandise contrasting with the white detailing of the design. I think this photo would have worked better in colour, in black and white I think it looks too busy.  However, my opinion does change from day to day. I am a fan of shots of market stalls, I find them good subject matter, however at the time of writing I am still in the colour camp for this one.

To sum up, the Yashica 44 is a quality little camera, easier to carry around all day than it’s bigger brothers, but still able to shoot sharp photos. They were going on eBay for next to nothing, however prices have doubled since I took up photography in early 2017, so if you fancy one, get in quick.

As for the Rerapan, it is all that is currently available in manufactured 127. It does lack a little contrast and photos can look a bit flatter than I would like, but it is good enough and I am happy to shoot it. The Xtol seems to have minimised any flatness in these photos. I do not know what film stock the Rerapan 100 is, however the ISO 400 Rerapan is Rollei RPX and I am looking forward to trying that next.