Normally I like people photos. Either candid street shots or informal portraits. I enjoy looking at other photography, but people are my thing.

However, last summer I had an overnight stay in the lovely borough of Richmond-Upon-Thames in London, and went strolling with my Yashica 635 TLR loaded with Ilford HP5 at box speed. 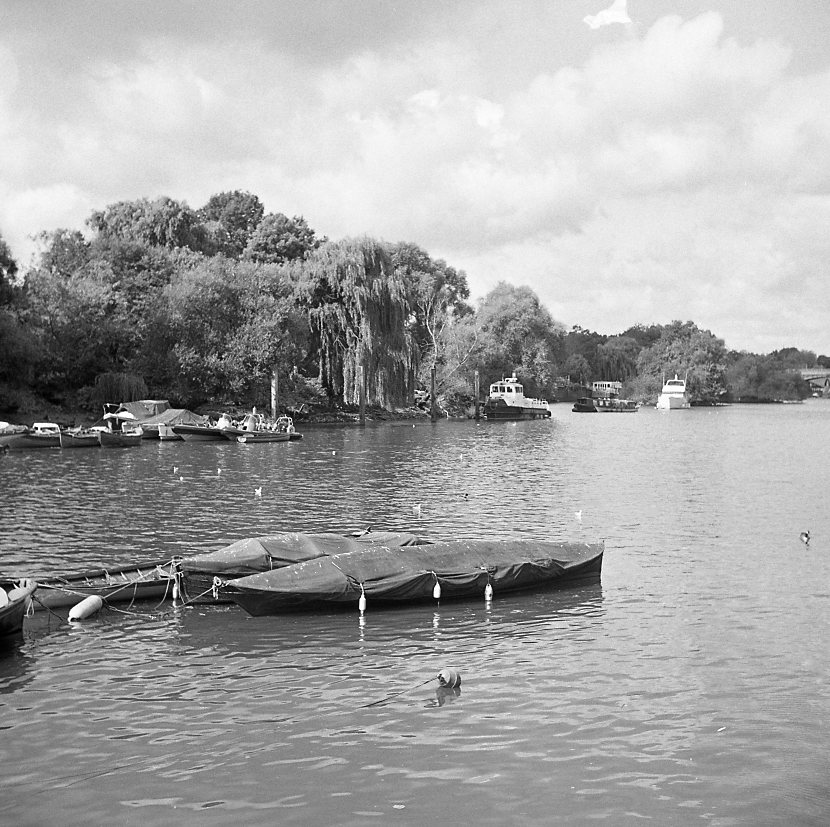 A view across the Thames from the riverbank at Richmond Upon Thames. Yashica 635 TLR and Ilford HP5.

It was a sunny day, and shooting a 400 speed film meant I could maintain a deep depth of focus. Additionally, on a sunny day when wandering, there are still large areas of shadow where there may be something of interest, but a 100 speed film would just be too slow.

I did not find any people of interest, but thought I would try some shots of what was around me instead.

The above photo was taken from the bridge crossing the Thames. The large depth of focus has enabled me to capture not only the foreground, but also plenty of detail in the far bank. But what this photo really demonstrates is how brilliant the medium format is at capturing fine detail, which is why it is my favorite format to shoot.

The HP5 has dealt with the direct sunlight reflecting off the water and trees, and offers a nice level of contrast to prevent the picture looking washed out. 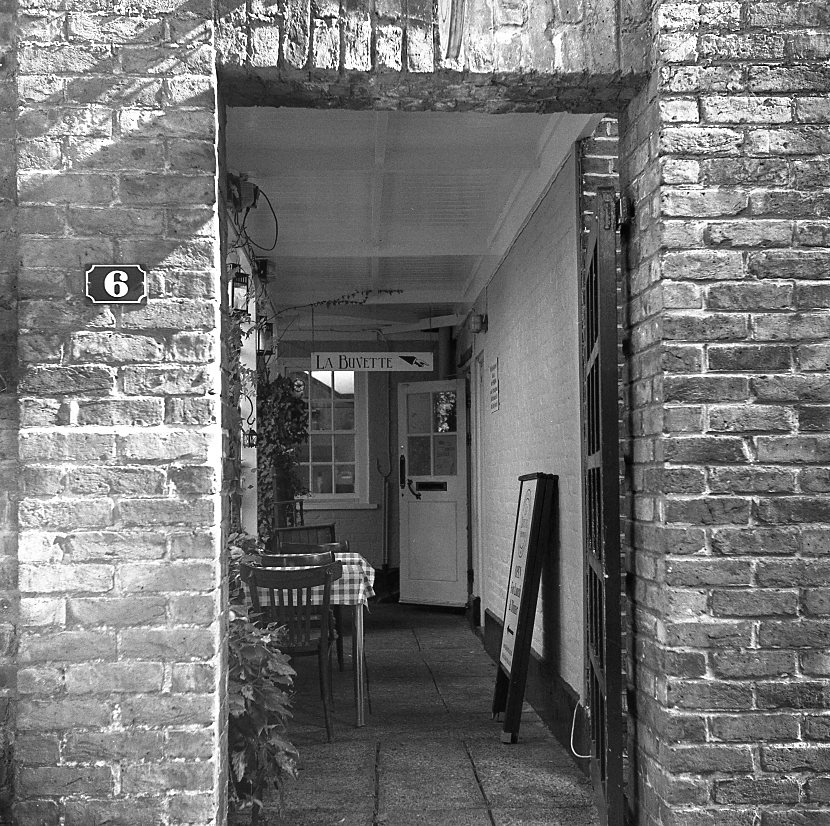 I like the above photo. I was reticent to take it, however my wife suggested I did and I am pleased with how it turned out.

The brickwork was in direct sunlight and the interior in shadow, so I had to expose for the interior (I simply guessed and wound back the shutter speed a couple of notches).

The film has not blown the brickwork framing the interior and has captured lots of texture and detail, which makes the photo more interesting. Not one of my most popular photos on Flickr (the first photo had far more views), but I prefer this one. 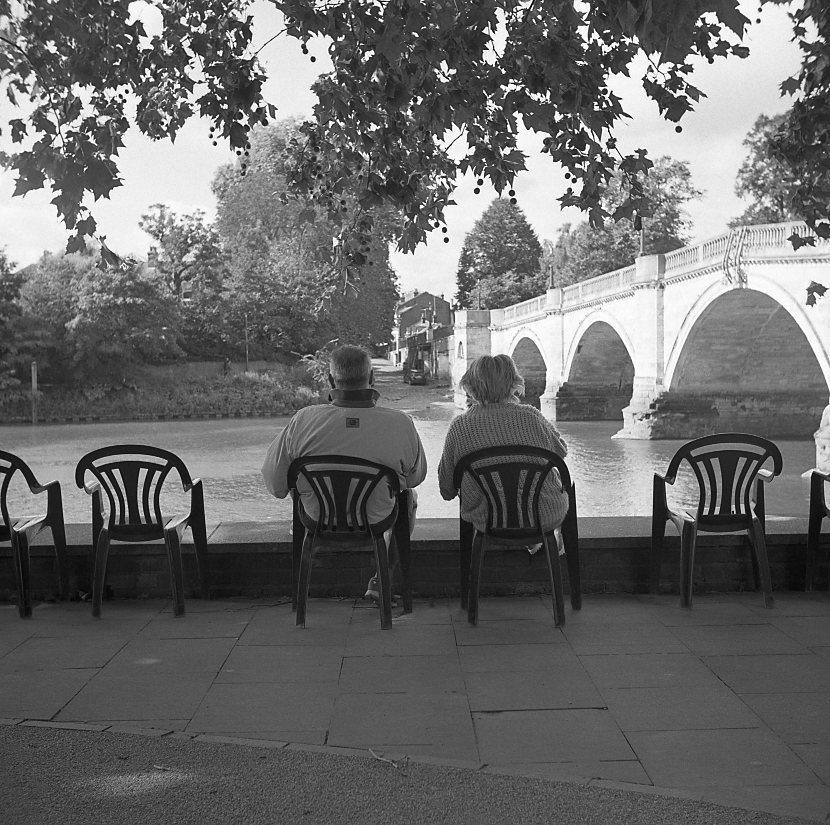 A couple relax in the shade watching the world float past slowly. Richmond Upon Thames, Yashica 635 TLR & Ilford HP5.

I had to get at least one photo with people and I thought this shot of an elderly couple relaxing in the shade next to the river summed up Richmond Upon Thames in the summer very well.

This relaxing enviroment and these types of shots are ideal for using a TLR camera. I have used my TLR’s for faster moving stuff, but for that I tend to use 35mm. For slower things, I would much rather lug around my old Yashica, and take full advantage of the glorious amount of detail they capture with such clarity. 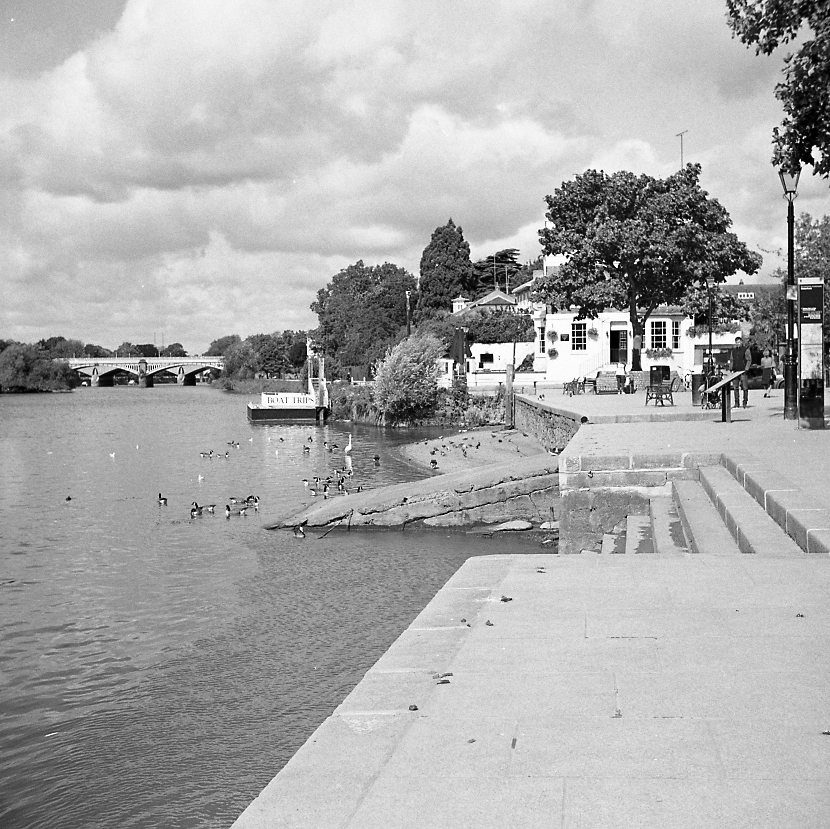 Along the bank towards the pubs, Richmond Upon Thames, London. Yashica 635 TLR & Ilford HP5.

The above photo has never been posted online before as it has taken a while to grow on me.

At first I thought the photo was over exposed. Perhaps it is, but only by a half stop or so. It was a very bright day and the light coloured stones on the bank and the white pub reflected a lot of light, however looking further back in the photo to the darker objects, the exposure seems fine. It also demonstrates the forgiving nature of HP5, it’s wide latitude enabling shots like the one above and the restaurant entrance.

I think this shot does capture the fact it was a bright summers day and had I exposed less, some of that would have been lost.

Shortly after this photo was taken, I enjoyed a couple of cold pints in the garden of the pub, using the pit stop to load a new film. 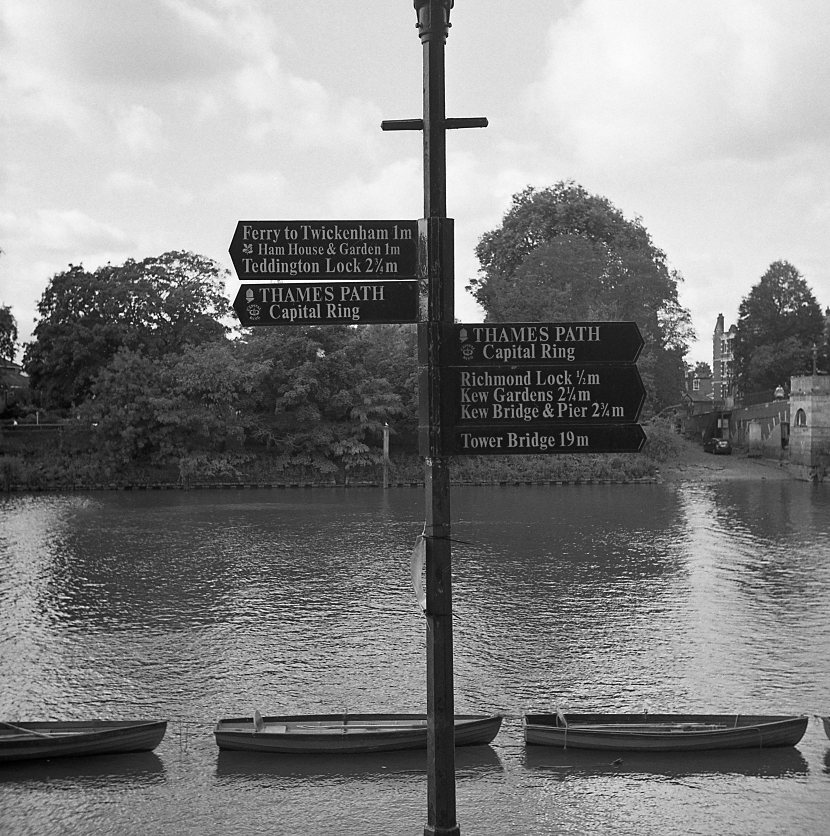 I often see a sign and think it would make a good photo, only to be disappointed when the film is developed. I don’t know whether this is my bad judgement of the subject, or whether the subject is good and I am a bad photographer and unable to capture what I see in the shot.

I was pleased with this shot. The sun had gone in, but thanks to using HP5 I was able to maintain a deep depth of focus and capture plenty of background detail on the far bank. I am still surprised with the detail these old Yashicas will record. The 635 (together with the D) is a very underated camera, being overlooked in favour of the crank wind ‘mats with their apparently superior Yashinon lenses.

I have no complaints about the performance of my 635 and it will continue to be a workhorse for me. Amazing performance from a camera costing only £36 for a mint example.

My ‘new’ YashicaMat LM has just been serviced and will also be pressed into service, but with medium format forming an increasingly large part of my photography, both of these cameras will see plenty of use in the years to come.