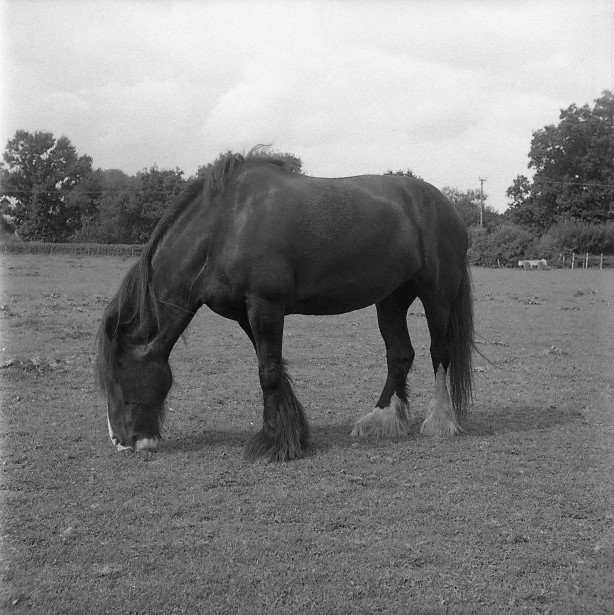 The Yashica 44a is a knob wind TLR, just like the Yashica D or 635. It has 60mm lenses instead of the 80mm lenses on the 120 TLR, which gives the same perspective in 127. The 44a does not have a Bay 1 mount for accessories such as lens hood. The A designation is unofficial, but is commonly adopted to distuinguish this model of camera from the previous crank wind model, the Yashica 44, which does have a Bay 1 mount.

Many 127 format cameras were cheap consumer models, however the Yashica 44’s are quality pieces of kit, up there with the ‘Baby Rollei’ in terms of lens and parts quality, hence they are capable of taking very good photos. Couple that with the large 4×4 negatives and they produce some incredibly detailed images which can be blown up larger than the same 35mm image. 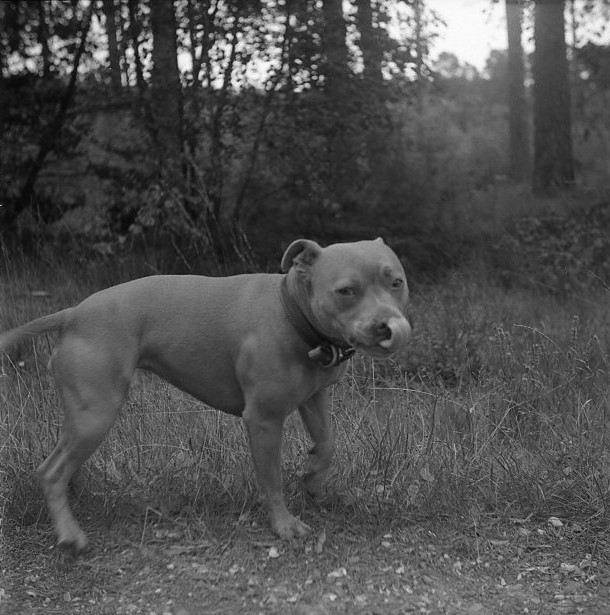 Staffy licking her nose whilst out walking. Yashica 44a TLR & Rerapan 100.

The above images were from a test roll I ran through the the 44a to see if it was working. I used Rerapan 100 film, as this is the only 127 film still in production. It is film re-rolled and repackaged by a company in Japan. There is plenty of specualtion as to who actually makes the film. I saw an article recently that suggested it was an Ilford film. The film has a slightly ‘old school’ look, with low contrast and plenty of mid tones. This look suits the camera, however I have not had the chance to experiment with this film much, so I do not know if a more contrasty look can be achieved. Nik & Trick, UK film photography specialists, state on their website that this film does not push well, so for anyone wanting a more contrasty look, you may have to source another custom re-rolled film. I will try pushing it regardless, but if anyone knows different, please leave me a comment. 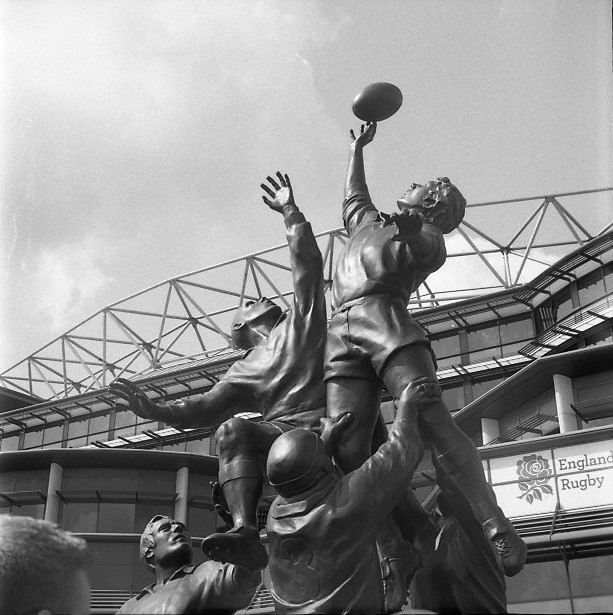 Scanning 127 was initially a problem. My Epson V550 scanner has film holders for both 35mm and 120, but not for 127 format film. I sourced a 127 film holder on Amazon, and it works well, but the scanner does not recognise the holder or the format, so I have to scan three negatives in as one image in the preview, then manually select the individual images. Even then, they all need very slight cropping to tidy the sides of the image. Slightly more fiddly than normal, but not a huge issue.

I like the tones in the photo of the statue above. The film seems to work well in bright light, catching plenty of mid tone details, but once again, not much in the way of contrast. In the photo of the horse and the dog, the camera and film have captured plenty of detail, and there is enough contrast to prevent the picture looking flat.

I was pleased with the photo of the staffy as this was taken on an overcast day under trees, so I was struggling to maintain shutter speed and depth of focus on a moving target, but managed to capture her well, especially as TLR’s do not lend themselves to shooting moving subjects. 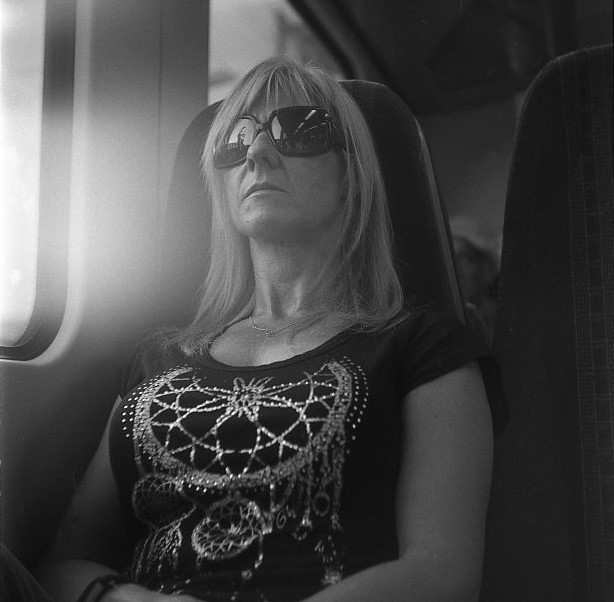 The above photo does show one shortcoming of the Yashica 44a. Yashica TLR’s are prone to lens flare. This is because the lenses do not have the modern coatings found on more recent lenses. On my 120 TLR’s I always shoot with a lens hood, even when not sunny, but the 44a does not have the Bay 1 mount needed for a hood or other accesories. Whilst the lens flare can capture some very nice effects when shooting near a light source at night, it is not generally desirable for day shooting unless you are trying to create a particular effect. In the above photo it has a certain charm, but I would have preferred the shot with less flare or no flare at all. All things considered, for the price I paid, I am very happy with my 44a.

I decided I liked shooting 127 format and wanted to be able to shoot safely in bright sunshine. I immediately started looking on eBay for a cheap Yashica 44 (the crank wind model with a Bay 1 mount). I quickly snapped one up and ran a test roll of Rerapan 100 through it. 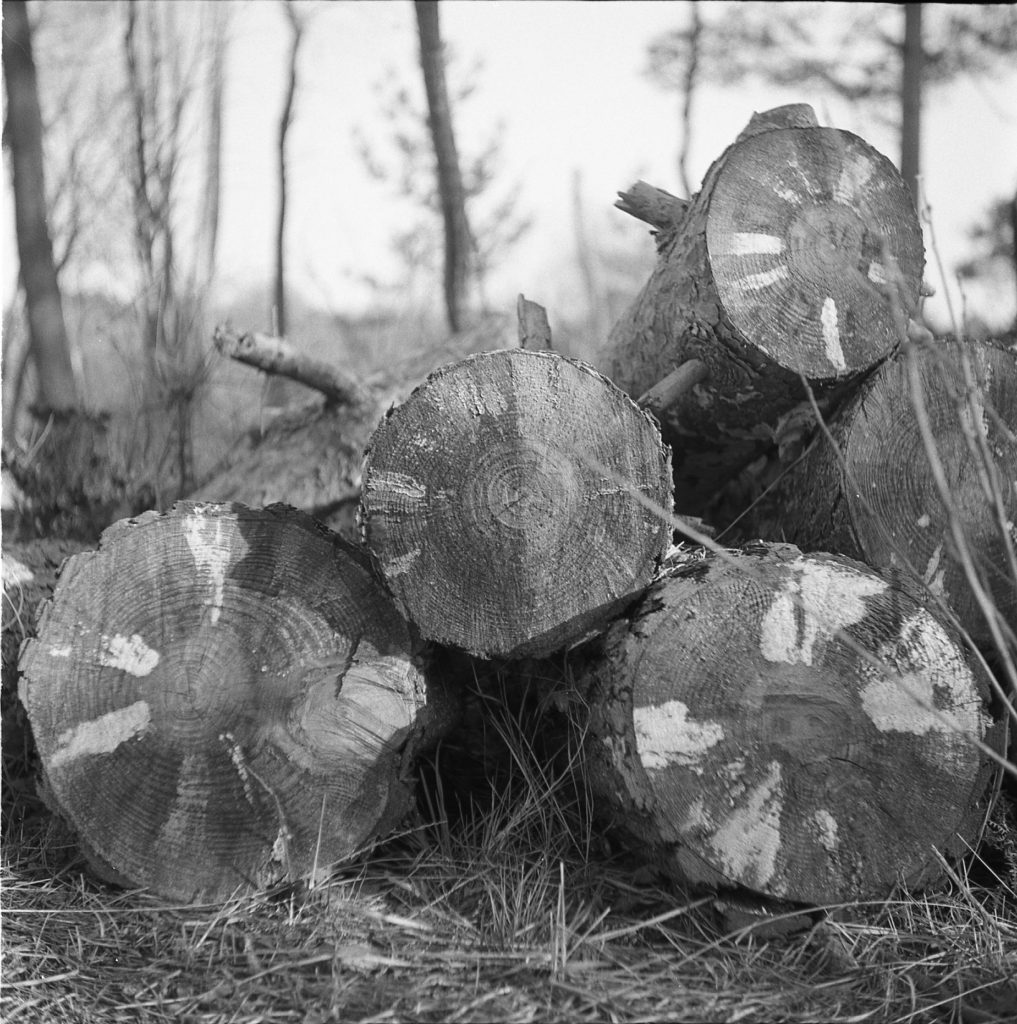 I took the camera out walking in the woods on a  spring sunny day. Although sunny, the sun was not bright. I had a lens hood fitted to the camera. The above photo was taken under some trees with a fairly wide open aperture setting. Although the centre of the image is pin sharp, with the aperture open the edges of the photo are softer in focus. The TLR’s come into their own with background bokeh, the background being nicely blurred. I will have to try this camera with some portrait shots. 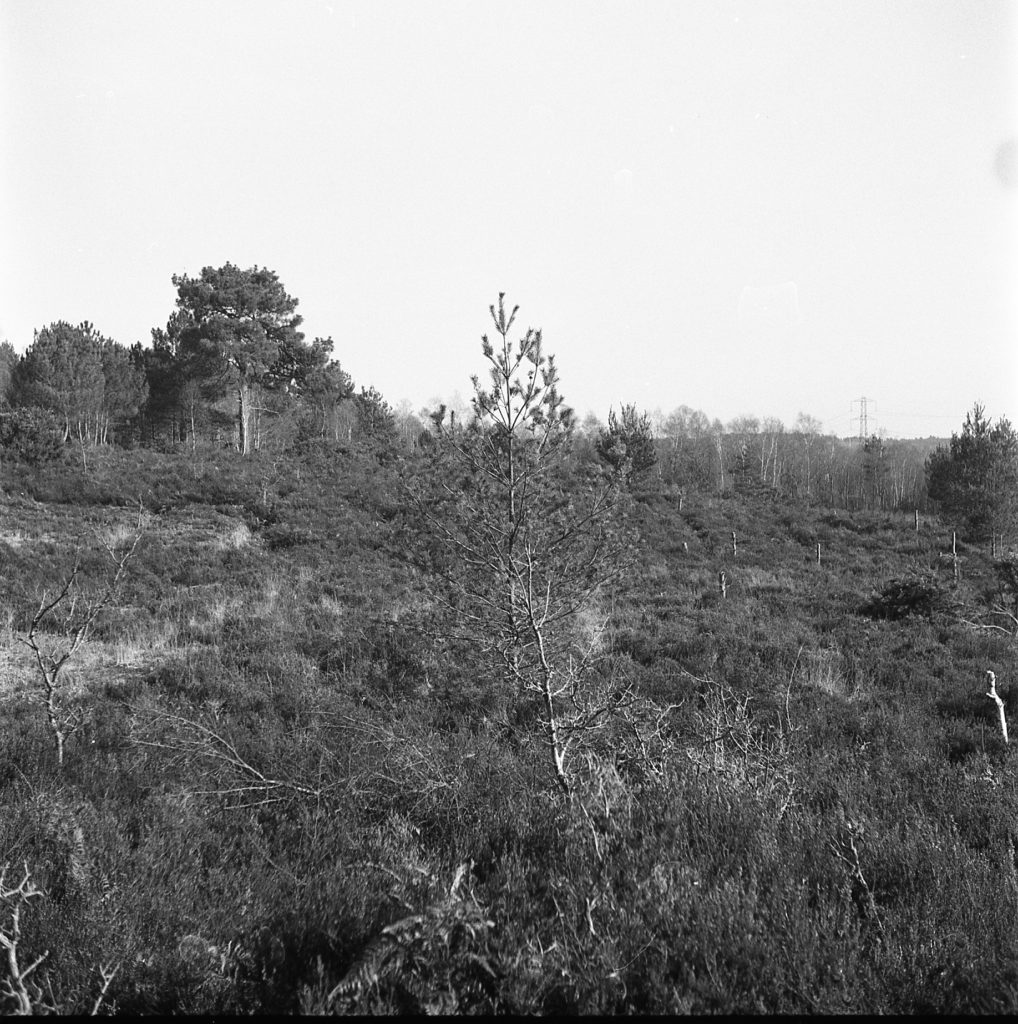 I tried the above shot across the goarse and bracken of Wildmoor Heath. The lack of contrast with the Rerapan film shows here. The lens was stopped down for this shot, and the softness around the edges has gone. The camera has captured plenty of fine detail in the shot, but a little more contrast would have been nice. I don’t think the subject matter has helped in this respect with constant green tones in the fore and mid ground.. 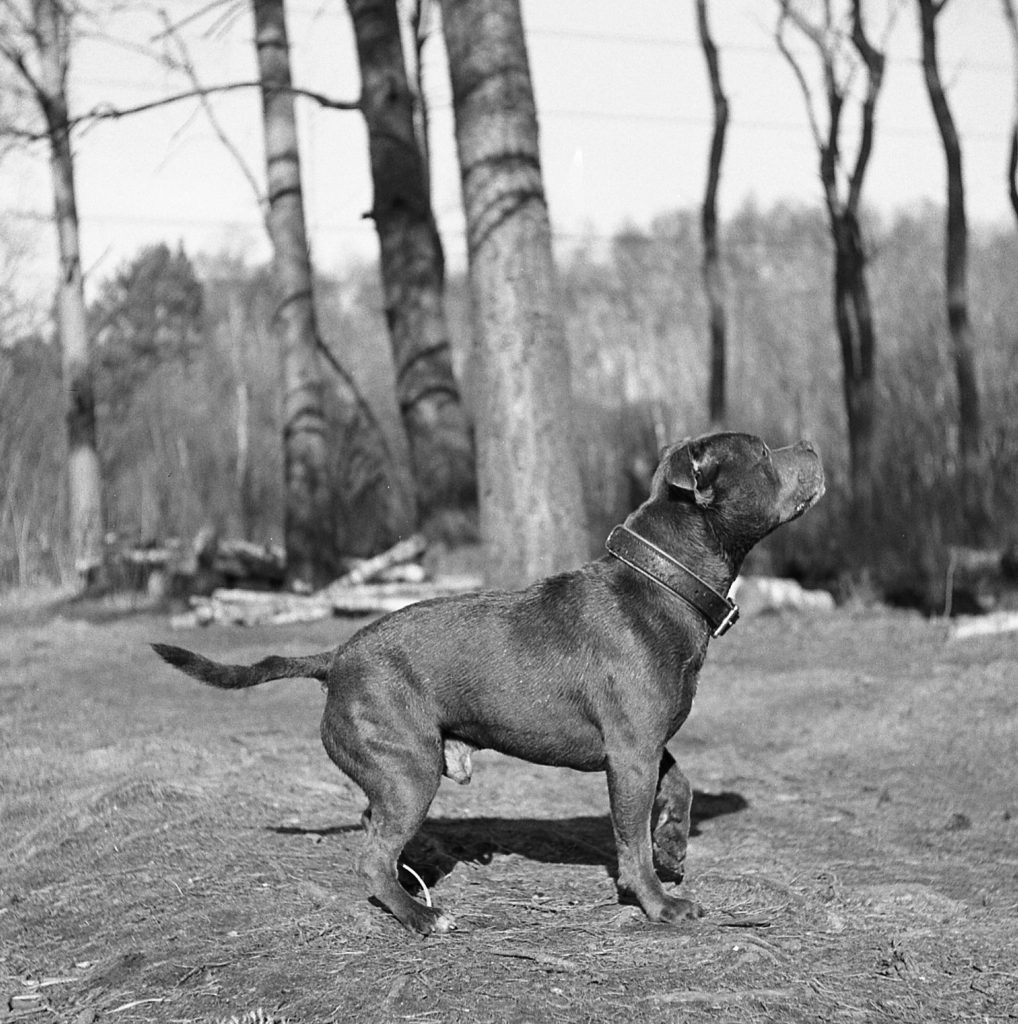 The blog would not be complete without another staffy shot. Once again, not bags of contrast, but the film seems to like lots of light and has more contrast than the other shots. The lens and film have captured plenty of details on the dogs coat, and the dog is in sharp focus, with a nice blur in the background. The bokeh was not intentional, I had to use an open aperture to keep a high shutter speed as the dog was moving.

Although I enjoy shooting 127 format, Rerapan is only available in ISO 100 so it may remain a mainly summer hobby.

I am very happy with the performance of both the Yashica 44 cameras. They are lighter to carry than my 120 Yashica TLR’s,  and I may switch to shooting 127 when I want to carry a smaller camera, instead of having to revert to my Olympus 35mm SLR’s.

My Yashica 44 has been serviced and I have purchased some Ilford HP5 re-spooled to 127 (although this is in limited supply and not always available), as well as a roll of Rollei Crossbird, an ISO 200 slide film that is designed to be cross processed in C41. I also re-stocked on Rerapan 100. Most of the Rerapan has already been shot, as has the Rollei Crossbird. The HP5 should mean I can carry on shooting into the autumn/winter. I am currently amassing a huge pile of film in all formats to develop. When the summer light fades and I have less time to shoot, I will mix some fresh chemicals and go on a developing and scanning marathon, which should keep me in pictures to post for another year.

I hope you enjoyed these test shots and if you are thinking of getting into 127, and want a camera capable of taking quality photos, then the Yashica 44 can be a cost effective way of starting.