I love markets, especially the more arty ones. The ones with stalls full of curios, antiquities and other interesting titbits. They attract interesting people, and that is what I like to photograph. People. Going about their everyday business. I would love to nail the occassional killer street shot, but that is not my aim when I go out with my camera. I like to capture everyday scenes, the things that no-one bothers to photograph, because one day all these things will be gone or changed and all that will be left are memories.

Greenwich Market in south east London is such a place. Greenwich is a very historical section of London and has several markets, all centered around the buzzing town centre with it’s own covered market, and this is where I went walking with my Yashica 635.

The film is a roll of Ilford Delta 400. I do not remember ever purchasing a roll of Delta 400, my weapon of choice is HP5, but I have a very vague recollection it came as part of a batch of second hand films I bought off eBay, although I processed it believing it was HP5. 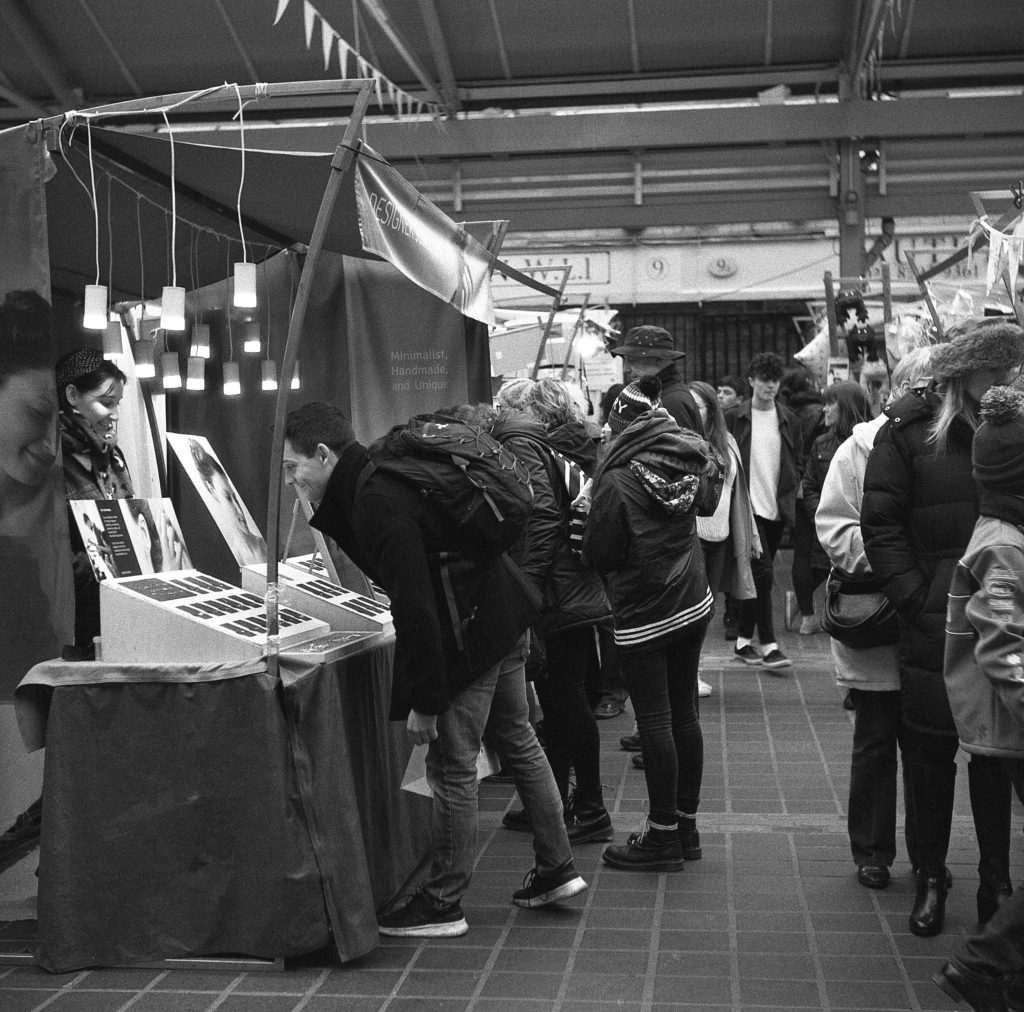 I love the chap leaning over the market stool in the above photo. I did consider cropping the photo to show just him and the stall, however I like detail in my photos. I like being able to see what the other people around him are doing and what they are wearing. For me, this all adds to the photo. Photography is very subjective, and others may feel a crop would have been better, but I like to see what the people around are wearing, the mix of ages and styles. 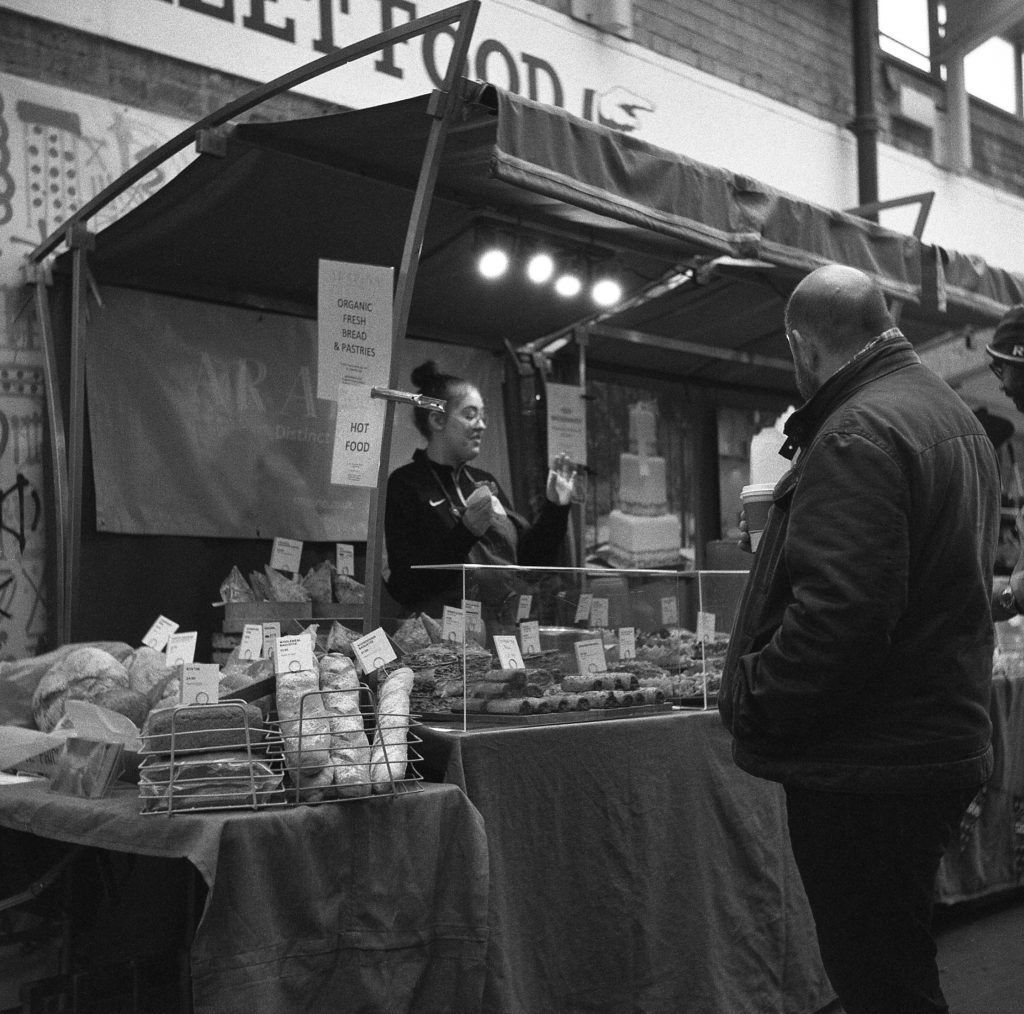 The above photo shows the stall holder chatting to potential customers. I love this sort of interaction. Supermarkets and the internet have sanitized buying things, and I miss these sort of interactions, especially when you are speaking to the people who have actually made the product, or who sourced and bought an individual item that is on their stall. This sort of banter was common place when I was a kid, going into a green grocers or butchers, however most of these types of shops have now gone. 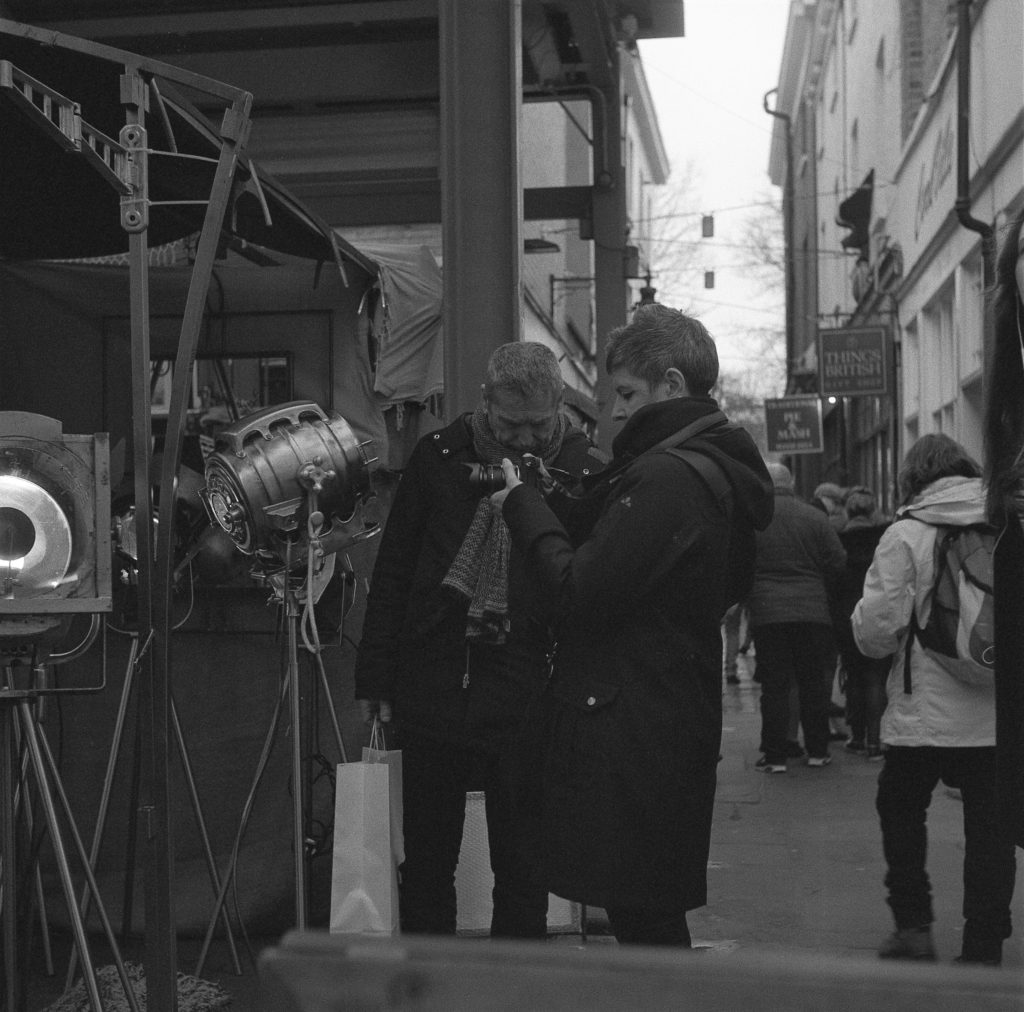 I came across the above stall selling old theatre and stage lights that had been fitted with dim bulbs and turned into ornamental lighting for the home. Many of the lights were illuminated and I liked the bare metal appearance of the lamps. Just as I was framing a shot this woman stoped and started to frame a shot of the lights as well, so I snapped her snapping the lights. Once again, I did try cropping this photo to take out the people and background to the right, however I missed having this additional detail in  the background of the shot, so I left the photo as it was. 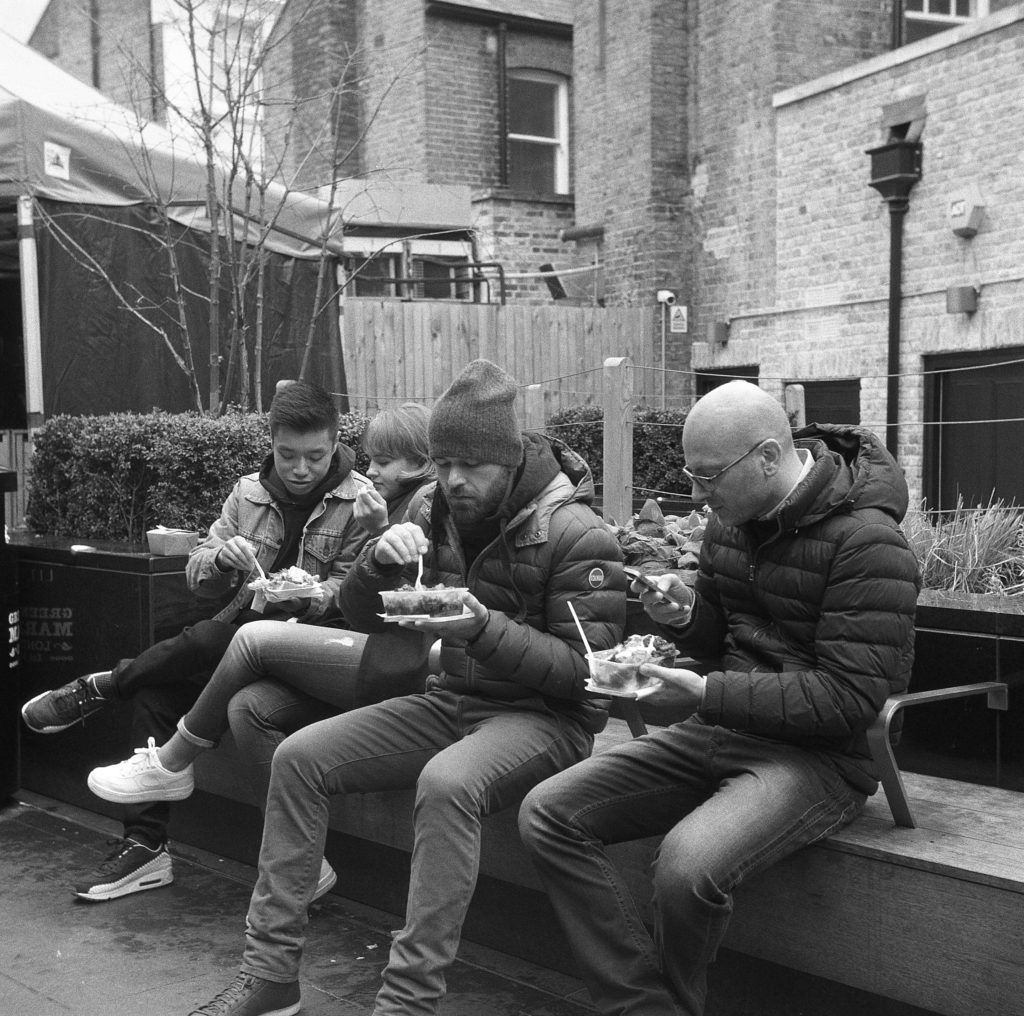 Another of the things I love about Greenwich Market is the food, so many stands bringing cuisine from all over the world to such a small space, you cannot help but be tempted by the smells floating around you. I could not resist a cheeky shot of these people sitting whilst they eat in the market. I have heard that the Delta range of films are far less forgiving to exposure mistakes than my usual HP5, but in all of these shots the photos have come out well. the film has a good level of contrast, some of the blacks are very deep, but it also displays a full range of midtones, capturing plenty of detail in the darker areas. The film has more contrast than HP5, but it is not overpowering. The grain is very pleasing too. This film was developed in Rodinal, a developer known for increasing grain, and an odd choice for a t-grain film, but I am pleased with the results. I normally save my films up and develop in batches using frech chems, however for a one off film development like this, I keep a bottle of Rodinal on standby. I would not choose Delta over HP5, but if I was offered more Delta as a cheap second hand offering, I would snap it up.

This shot also shows the covert nature of the TLR cameras. Some people make them sound like the ultimate stealth photography machine. In the wrong circumstance, they can make you stand out like a sore thumb, but in situations where you can blend into the crowd, they are far less obvious than an SLR, and this was one of those situations. I just stood back against a market stall, with people passing between me and the subjects, framed the shot and snapped when I had a clear shot. 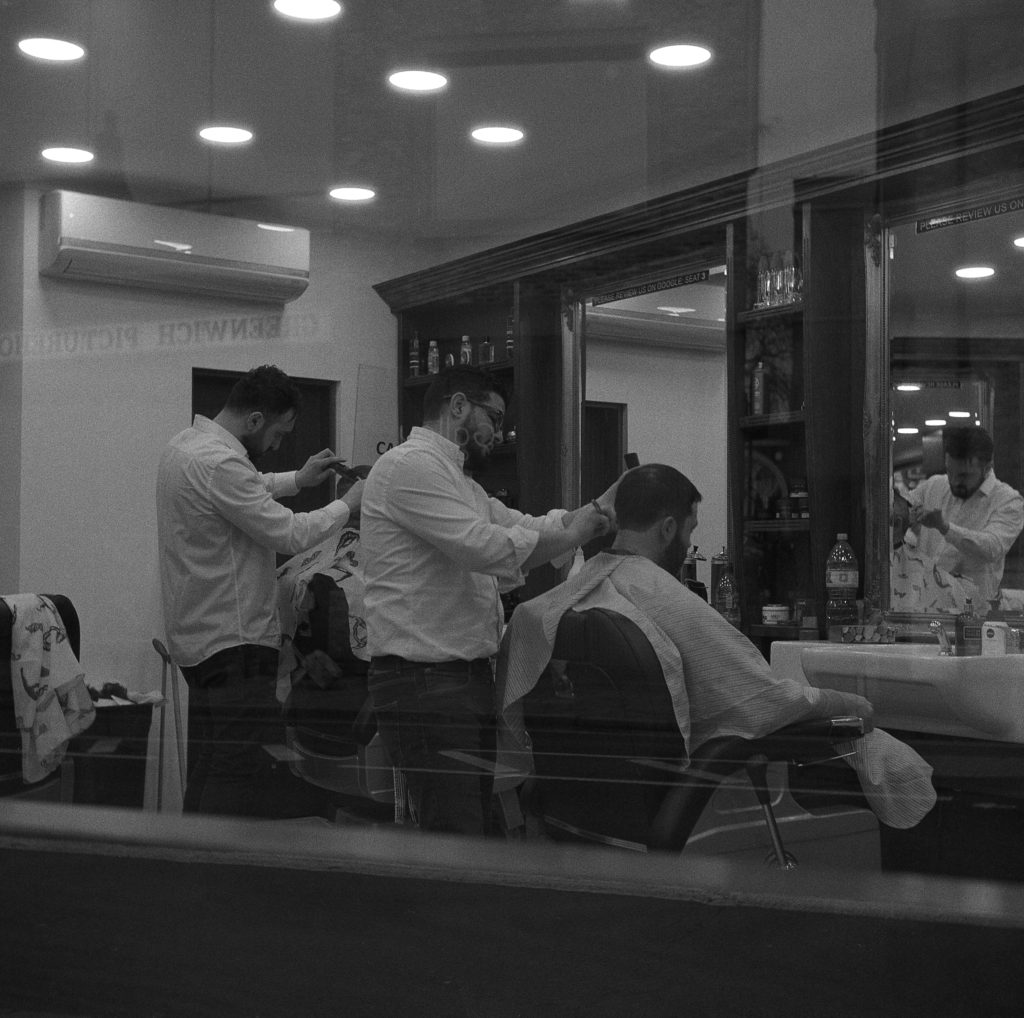 After I left the market I had a frame or two left and walked past the above barber shop. I could not resist a shot through the window of the two gentlemen having their hair cut, especially as the two barbers were both standing in a similar pose.

I hope you enjoyed the photos. Please subscribe below to receive an email alert when I post something new and please leave me a comment, if only to say Hi!