Last November I visited Yorkshire with the family (including our two staffy dogs). This was the second visit that year. We stayed in a dog friendly apartment which was actually on the Yorkshire Moors at the very edge of a small hamlet. 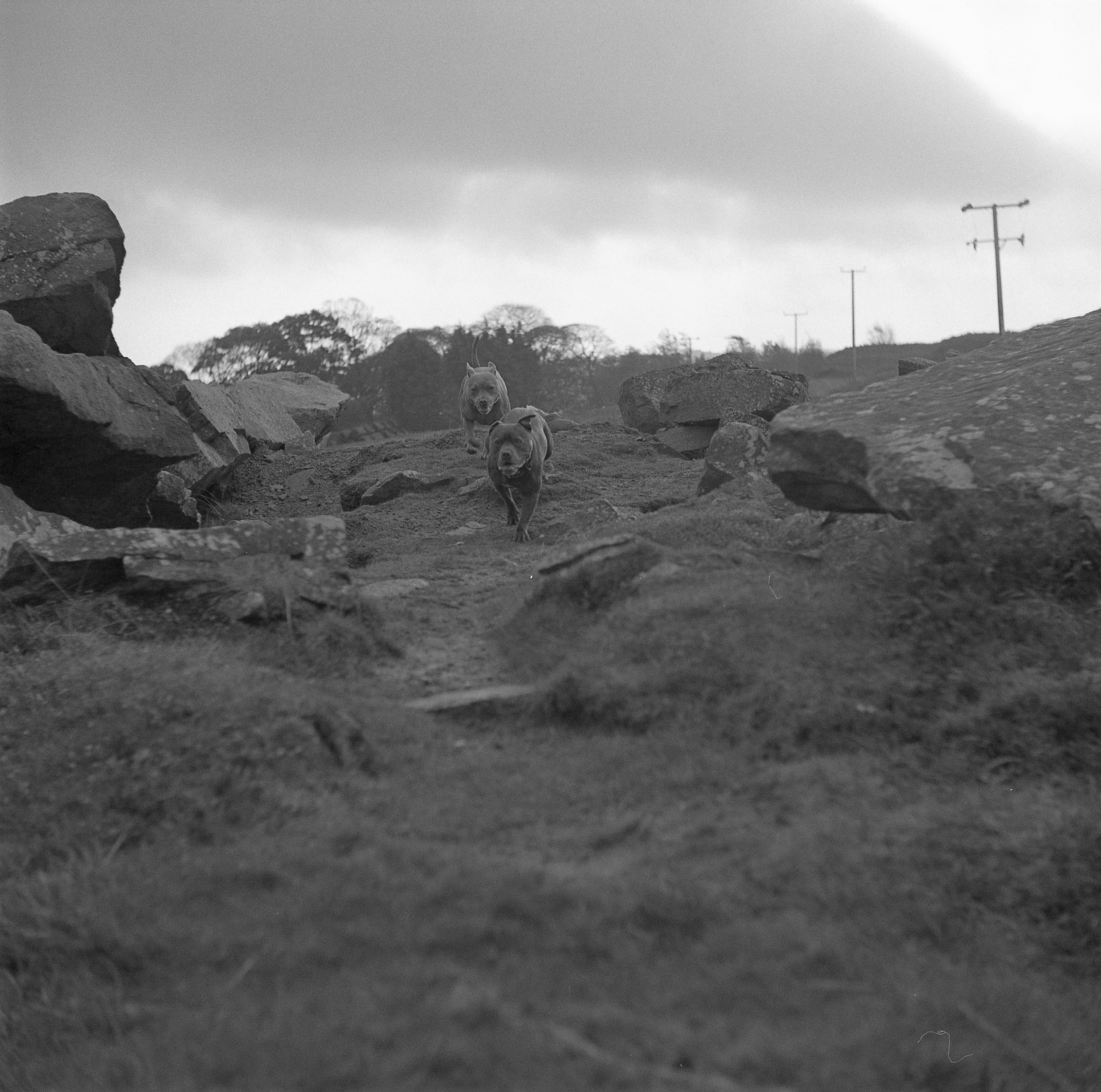 I chose to take my Yashica 635 TLR instead of a 35mm camera, as I wanted to practice more with my medium format photography. I chose Ilford HP5 shot at box speed, as the light in November is not the best and I wanted to maintain a depth of focus if shooting on the moors and a reasonable shutter speed.

Our dogs absolutely love the moors. The apartments side gate opens straight onto miles of open moor. The dogs go crazy, running and sniffing, and do not slow down until you take them home and they collapse in a heap. I love the above photo which caught them in mid sprint, their expression showing just how much fun they were having.

Shooting a fast moving target with a TLR is always a challenge, but with practice I have managed to speed up my framing and focusing of a shot considerably. It shows the HP5 was a good choice as the deep depth of focus gave me room for error and the shutter speed was fast enough to capture a sharp image of the fast moving dogs.

It is surprising just how agile you can be with a TLR when you use it often. They will never be a fast as a 35mm SLR, but I do not miss much. I read a quote from another photographer (I think it was Gary Winogrand) who said ‘Don’t worry about the photos you can’t get, worry about the ones you can’. This is very true, and I apply this way of thinking to my TLR photography. Shooting with such a simple camera really focuses the creative side of your mind as you do not have a multitude of settings or equipment to choose from. 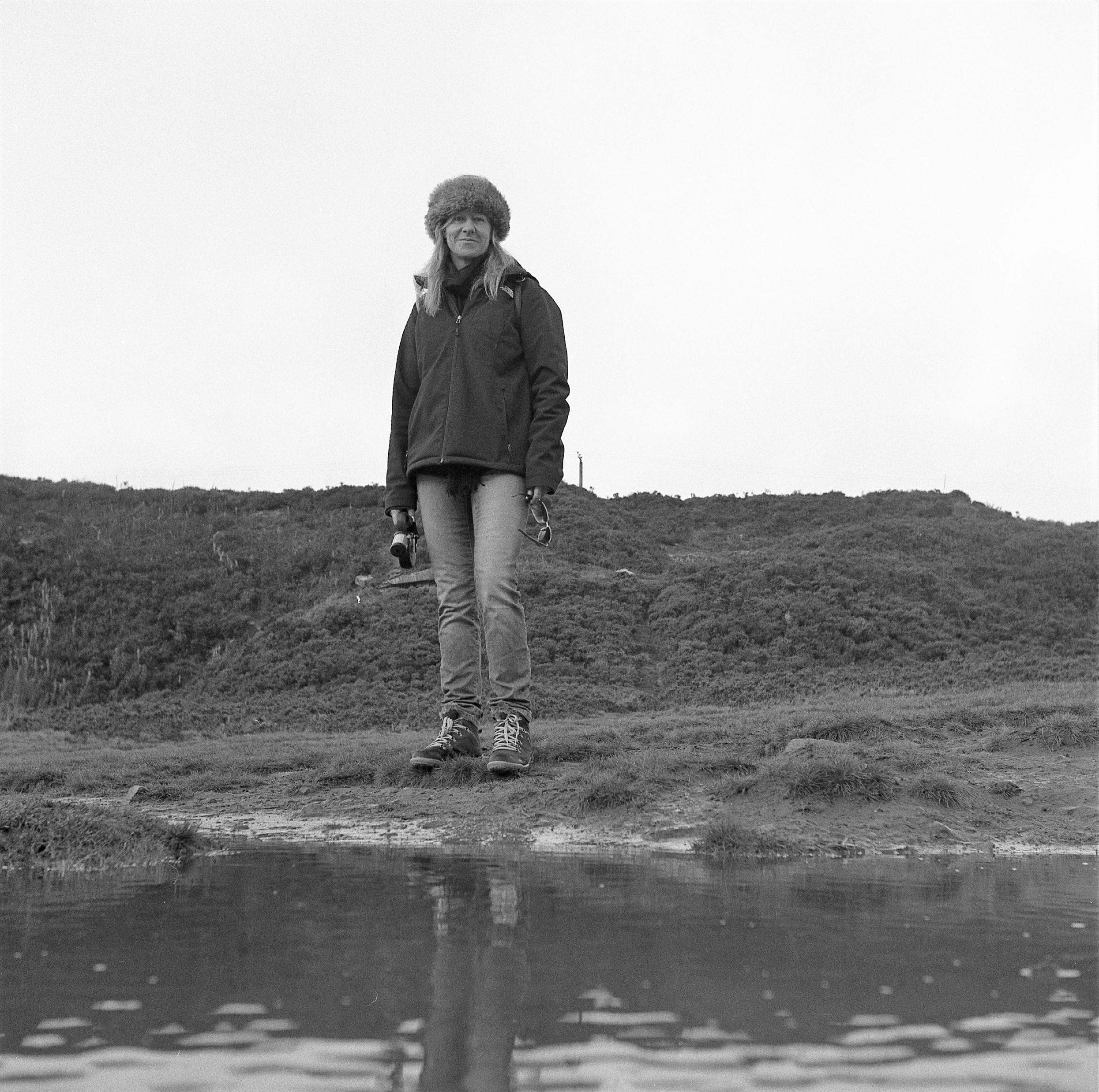 Trying for an arty shot on the Yorkshire Moors.

I tried to get a bit arty with the above portrait by getting low down to the puddle we were standing next to. I thought it would make it look like I was shooting across an expanse of water.

It worked to a certain extent as the puddle looks like a decent sized pond and appears larger than it actually was, but not the lake effect I was hoping for.

I like the way the water is out of focus, but the big 120 negative has captured plenty of detail in the background. I did not try to blur the background as I was shooting with the top half of the subject against a plain, light background, so she stands out anyway. As an informal portrait, I like the picture. 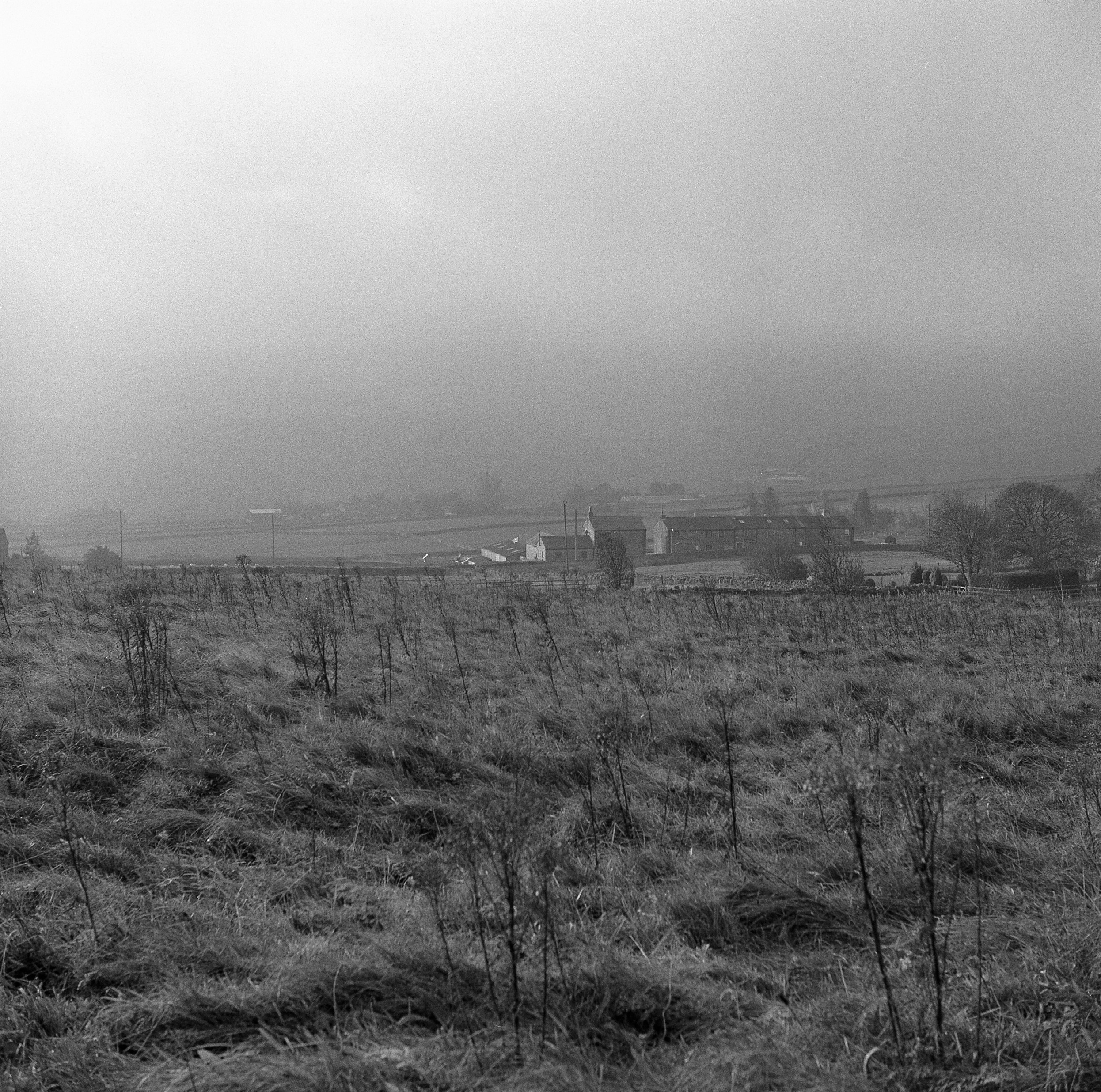 A shot across the misty Yorkshire Moors on a winters morning. Yashica 635 TLR & Ilford HP5.

The above landscape shot was taken early in the morning across the misty moor. I think this is a lesson in how not to do a landscape shot with black and white film. In person, the mist looked lovely, and I have seen some wonderful fog/mist pictures captured on black and white stock, however there are too many mid-tones in this picture and it does not work well in monochrome.

I think for these shots to work, it may require more contrast between the white mist and a dark subject. Or perhaps bold, dark subjects in the mist. Here the mist was a grey colour because of the poor light, and the green background has gone a mid grey, so it looks a bit washed out. If anyone has any opinions on this, please let me know. 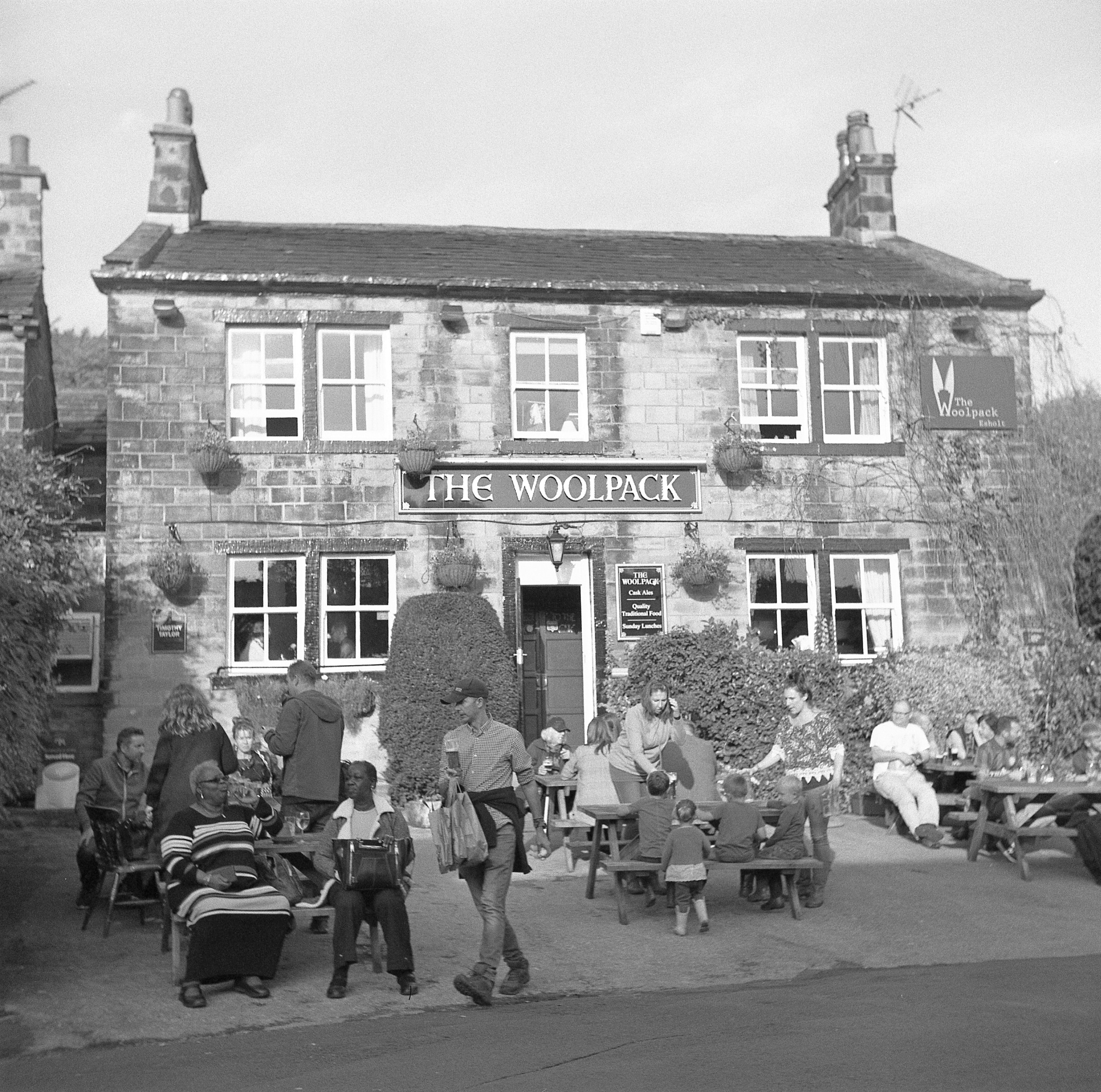 The Woolpack Pub from the long running British TV series, Emmerdale Farm (or Emmerdale) as it is now known. Yashica 635 TLR & Ilford HP5.

No visit to Yorkshire would be complete without a visit to the famous Woolpack Pub, which featured in the long running TV series Emmerdale Farm. The series was actually filmed inside the pub, and photos of the cast adorn the walls.

The show had a makeover to modernise it a few years back and they stopped filming at the pub and started using a set at the studio for the indoor shots, although they did recently return to the Woolpack to film a one off episode where one of the shows long running characters died.  The pub is actually sandwiched between houses in a town, but from the TV series you think it is in the middle of a small remote village.

Tourist flock to the pub and most of the people outside are visitors, rather than locals, as a coach of sightseers had just arived.

The pub does a good Sunday lunch served inside a huge Yorkshire pudding.

To sum up, another solid performance from the Yashica 635, a camera frowned upon as not being the best of the Yashica TLR line up. The Yashikor lens never lets me down, despite allegedly being inferior to the Yashinon lenses of the ‘Mats, and teamed with the ever reliable Ilford HP5, is a very flexible combination for when I only want to take one film with me to cover nearly all situations.  Photos developed in Ilford ID11.