Yorkshire is one of the places in the UK I never get bored of visiting. I frequently stay around the Hawarth/Hebden Bridge areas. The moors are stunning to walk across and the villages are beautiful. 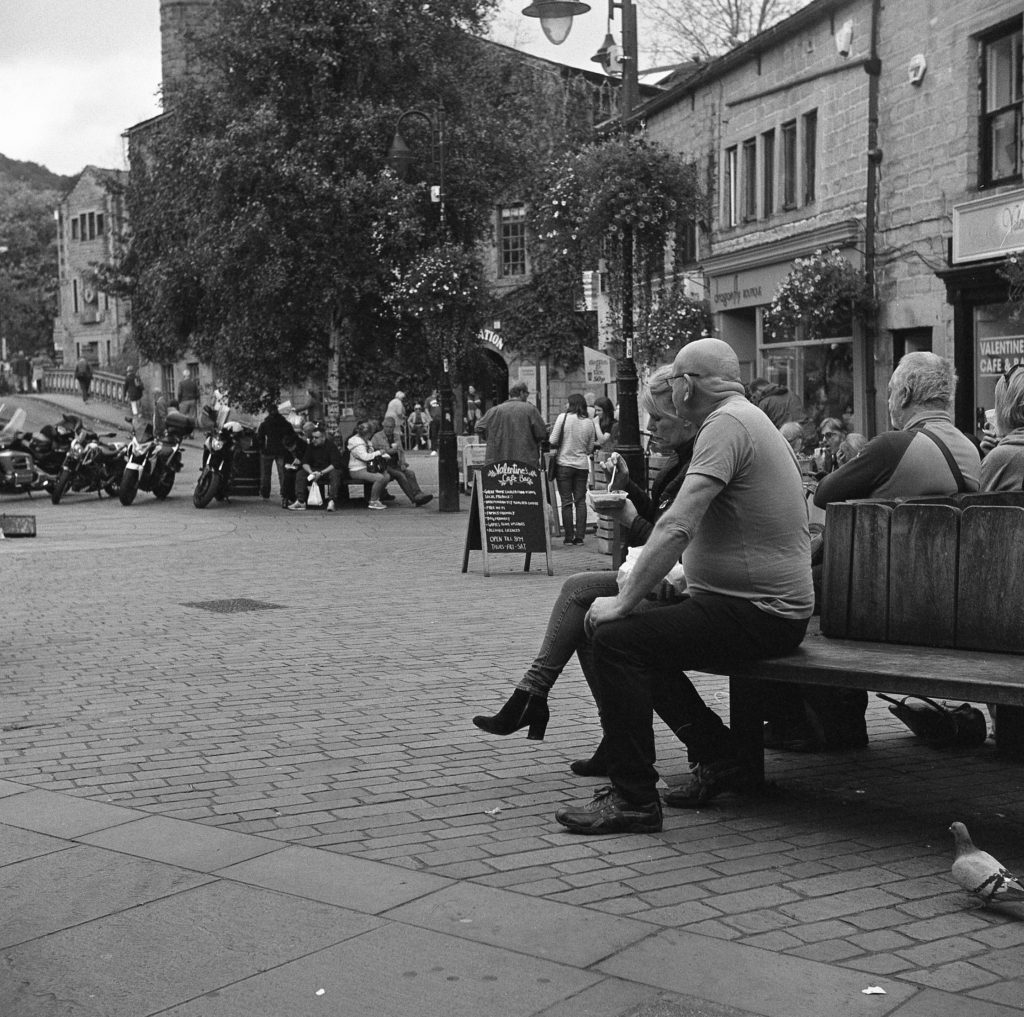 I decided to carry my Yashica 635 TLR loaded with Ilford HP5 at box speed. It was Nov 2017 when I took these photos, and a 400 speed film was the way to go to deal with the variable winter daylight.

The above shot was taken in a small plaza surrounded by cafes, and a popular spot for people to sit and relax. I like the tones the HP5 has produced, enough contrast to stop the photo looking flat, but the tones remain smooth. I also like the lack of grain for a 400 film, possibly helped by using Ilford ID11. 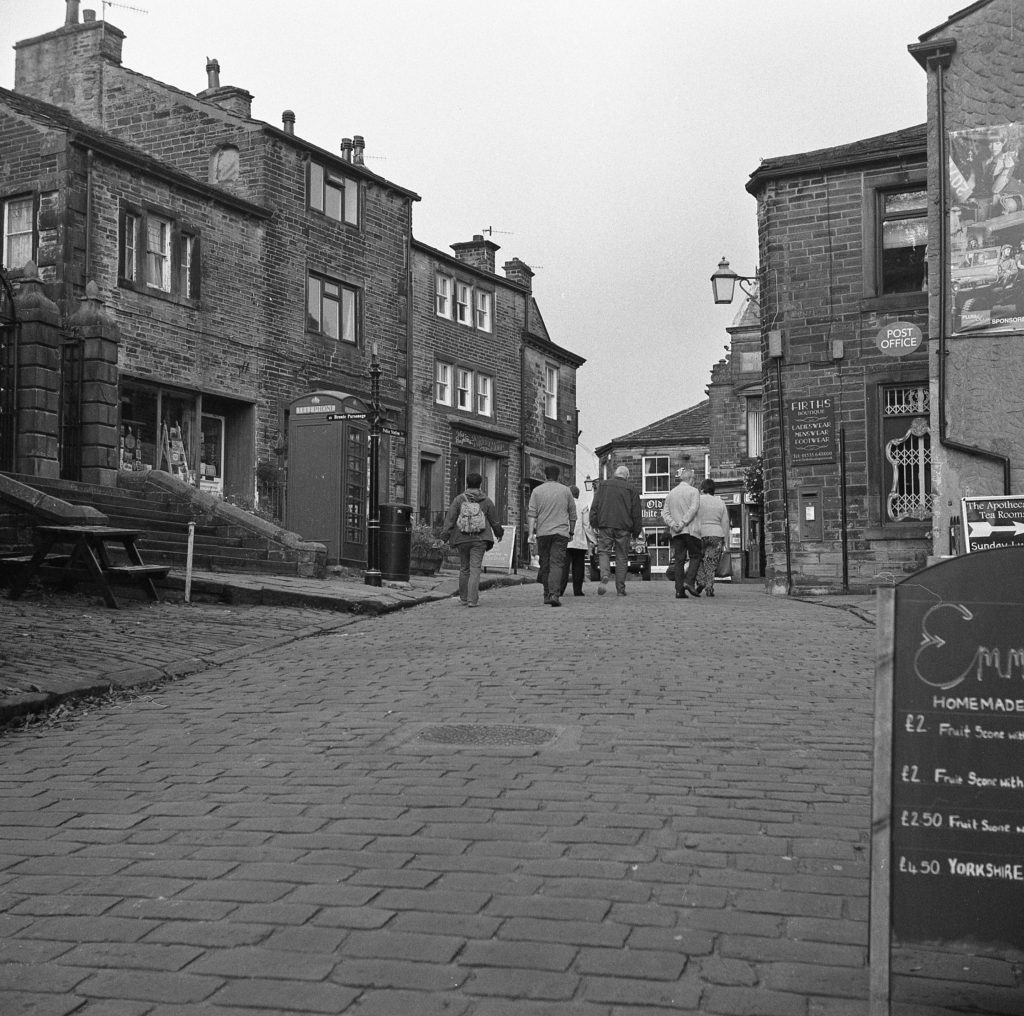 The second photo was taken in Howarth, famous for the Bronte sister authors who lived there. This town is even more picturesque and more historically preserved, less trendiness than Hebden Bridge, and ideal for some slower TLR photography. I arrived in Howarth early one Sunday morning and grabbed the above shot of some people out for an early morning stroll. I love street shots with people, they give a photo interest and character. I also like plenty of depth of field, so lots of detail is captured in a picture. The above photo has plenty of detail, building details, signs that can be read, even the texture of the stone is captured. Had I used a faster film I think I would have been struggling to maintain shutter speed AND depth of focus. 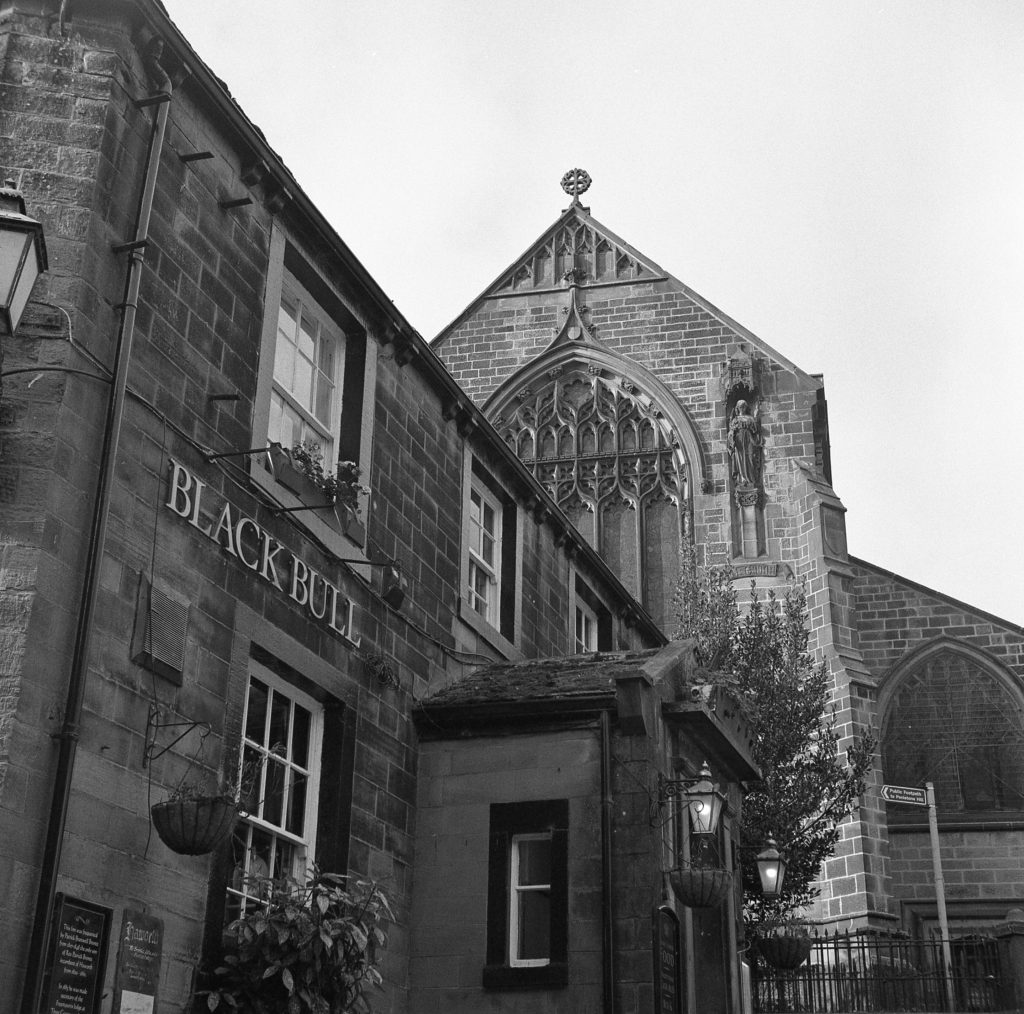 This last photo contains no people, which is unusual for me. I know some people love scene or building shots without people, but people are my thing. However, I do like this shot. I was sitting in the cafe across the road and looked up and thought the pub made a good shot from this angle, and I think I was right. Something about the angle of the pub set against the upright and straight church just works. Once again the HP5 has captured plenty of detail and mid tones, and the Yashikor lens on the 635 has remained sharp.

I think these photos show the TLR at it’s best, taking amazingly sharp, detailed photos of stationary or slowly moving scenes. I love to play at faster street photography with my TLR’s, but I know what they are best suited for, I have my 35mm SLR’s for when things get a bit crazy.

I am now studying hard for an exam so will have little time for photography for several weeks. I also have about 30 films in my fridge (about 20 roll film in 120 & 127) which need developing and scanning. Plus I have several trips away where I will be taking my cameras, so I fully expect to add at least another 4-5 films to that total. That will give me enough material for another 6 months of posts, but will be at least two weeks of processing and scanning.